According to The Old Farmer’s Almanac, spring arrived earlier this year that it has since 1896, at 11:50 p.m., March 19. It couldn’t have come at a better time, as far as we’re concerned. We may not be able to get out and celebrate the season as we normally would, so please enjoy this virtual tour of the Enid A. Haupt Garden, led by volunteer Janet Hewitt.

Wandering through the Victorian garden between Ripley Center and the Smithsonian Castle, on a break from volunteer duties in an art class, I always silently thank Enid Haupt.

The lady with the charming Old-World name has endowed the loveliest stretch of garden that lines the path I scurry down in search of coffee. Rain or shine, summer or winter, it never fails to bring a smile. 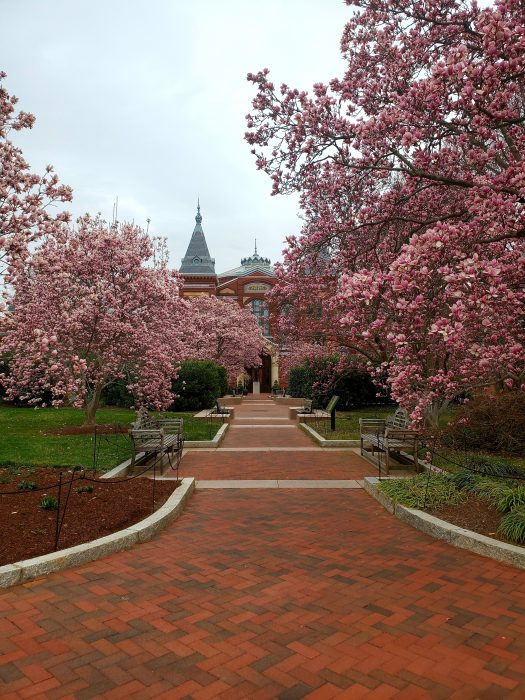 Only the turrets of the Arts and Industries building can be seen through the endless Magnolia blossoms in early spring
Credit: Alexis Miller

In early spring, colorful pansies and snowdrop plants (Galanthus for the botanists among us) line the way. Exotic twisting pine limbs seem to be searching for a way to escape the confines of their gorgeous containers. And then there are the Saucer Magnolias–with their signature white-lettered garden markers–teaching me a Latin name I will instantly forget.

As a retired person, this pleasing route contrasts starkly with the bland stretch of M Street I used to race down during my 15-minute foraging breaks as a magazine editor. What did I pass then that might compare?

A gritty McDonald’s was across the street. A CVS pharmacy was on the corner. And a District Taco was a distinct upgrade that we celebrated when it arrived. 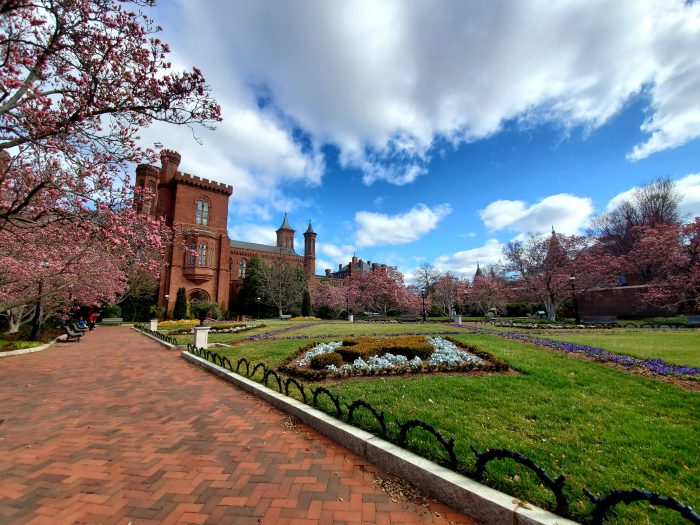 The Victorian-style parterre pairs with the blooming magnolia trees, breathing life into all that walk through
Credit: Alexis Miller

I remember being very glad for the few trees able to make it through the winter in the middle of that concrete desert.   And I recall feeling sad for the little leafless trees that didn’t survive.

But now, in my new volunteer life, I have found coffee-break nirvana.

So what actually inspired this wonderful person (may I call you Enid?) to think of creating this lovely space behind the Castle for visitors, staff and volunteers? What is your history Enid Haupt? And how can we possibly celebrate your lovely legacy and tell you how much it means to us who roam the Castle grounds? 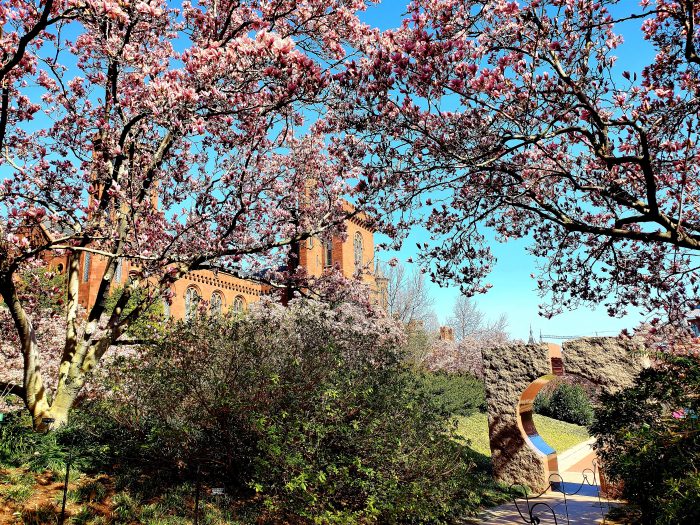 The Castle peeks through spring blossoms on magnolia trees at the entrance to the Moongate Garden
Credit: Alexis Miller

According to a posted sign in the garden, Enid Annenberg Haupt was a philanthropist and publishing heiress who “donated millions of dollars to support public gardens, horticultural institutions, and other green spaces in Washington, D.C., New York, and around the world.”

The sign adds this telling quote from the lady herself: “Nature is my religion.”

Another nearby sign informs readers that the 4.2 acre Enid A. Haupt Garden was completed in 1987 and actually is made up of three distinct gardens. “The Moongate Garden, next to the Arthur M. Sackler Gallery, draws design inspiration from the Temple of Heaven, a 15th–century religious complex in China.” 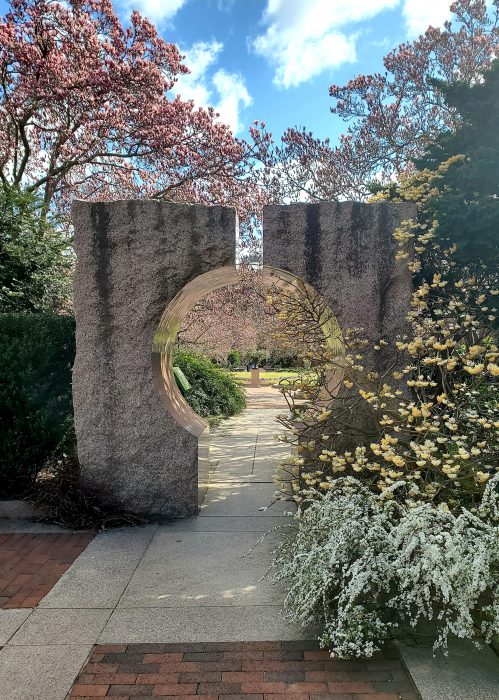 One of the two vertical moon gates, placed specifically to frame other aspects of the garden
Credit: Alexis Miller

The second garden, “The Victorian-style parterre, extends the Castle’s grand welcome through an expansive lawn and formal plantings.”

Finally, the third garden, “The Fountain Garden, located beside the National Museum of African Art, was modeled after the Alhambra, a 14th–century Moorish palace and fortress in Spain.” 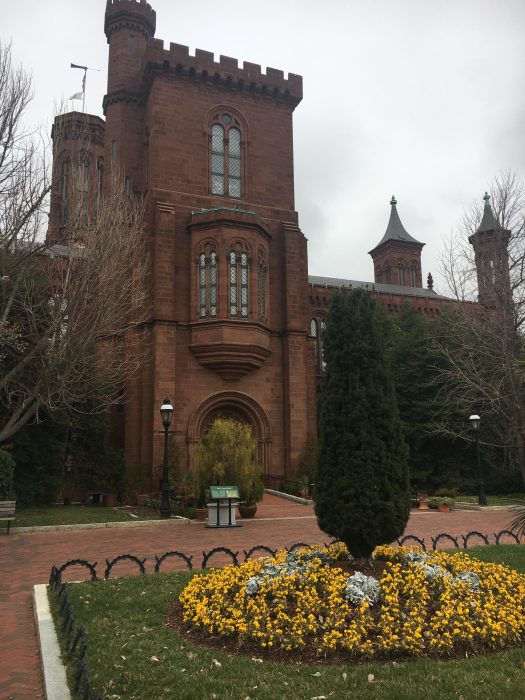 The southern entrance to the Castle welcomes visitors through the Haupt Garden
Credit: Janet Hewitt

So that’s the skinny on the gardens, but what about the lady herself. What’s her story? The photo of Enid A. Haupt on the sign in front of the Castle shows an elegant, well-dressed woman in a purple suit, matching hat, proper white gloves and a handbag draped over a slender wrist. There are other photos of her online, including one where she’s arm-in-arm with another famous nature lover, Lady Bird Johnson.

But where did life begin for this eco-friendly heiress?

Enid Annenberg Haupt was born in Chicago on May 13, 1906. She was a middle child of eight born to her parents. Her father was Moses Annenberg who built a publishing empire around The Daily Racing Form and The Philadelphia Inquirer. 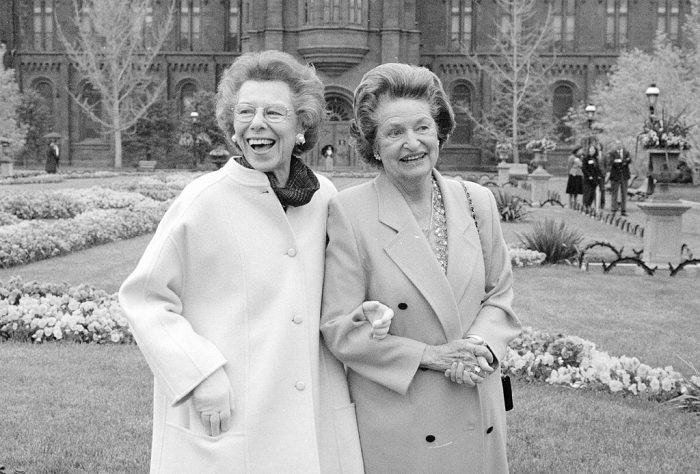 Enid A. Haupt (left) and Lady Bird Johnson in the Enid A. Haupt Garden in the South Yard of the Castle, on their way to a celebration being held for Mrs. Johnson in the Arts and Industries Building, April 24, 1988, in honor of her 75th birthday. Mrs. Haupt, a New York philanthropist and noted supporter of horticultural projects, donated funds to build the garden over the underground complex consisting of the National Museum of African Art , Arthur M. Sackler Gallery, and S. Dillon Ripley International Center. (Photo by Richard Strauss, as featured in the Torch, June 1988)

She grew up in Milwaukee and attended Mount Ida Seminary in Newton, Massachusetts. From 1953 to 1970, she served as publisher of Seventeen magazine. But first and foremost, she was a generous philanthropist.

Her many gifts to the nation include a 27-acre plantation called River Farm, near Mt. Vernon and once owned by George Washington, that she gave to the American Horticultural Society. Haupt also saved from demolition a Victorian-style conservatory in the New York Botanical Garden. And she helped maintain the gardens of The Cloisters (part of the Metropolitan Museum of Art).

Haupt contributed to preserving gardens around the globe, including Claude Monet’s garden in Giverny, France. And she helped support Lady Bird Johnson’s National Wildflower Research Center at the University of Texas at Austin.

But at the end of the day, it’s the one right here at the Smithsonian Castle that I get to enjoy most often. So, thank you, Mrs.Haupt.

Janet Hewitt is an award-winning financial journalist who, for close to three decades, served as editor in chief of a well-respected business magazine. Now retired, she happily volunteers for oil pastel, drawing and mixed-media classes, as well as in the office for the Smithsonian Associates studio arts program.

One Response to Thank you, Mrs. Haupt.