We focused on America’s troubled history of racism this week and considered plans for a new Native American Veterans’ Memorial, a reimagining of a pivotal Civil War battle, a thoughtful essay by Lonnie Bunch and reviews of the new exhibition, “Americans.”

Why Is a Redskins Blanket On Display in the American Indian Museum? A Curator Explains 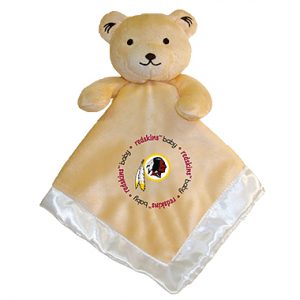 Native American imagery is every­where, from the Atlanta Braves to Apache helicopters. This new permanent exhibit gathers a trove of artifacts, film clips, and still images to focus attention on how widespread Indian references are in American culture. We asked curator Paul Chaat Smith about a few of the items. Read more from Abbey Gingras for Washingtonian.

Native American veterans will be honored with memorial on National Mall 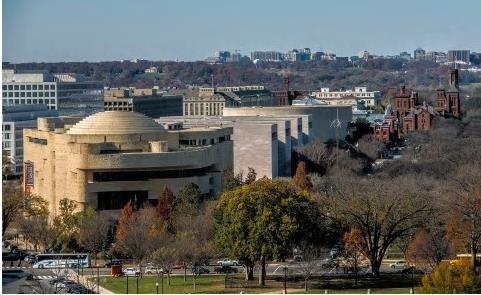 The Mall is studded with monuments to iconic people and events, from presidents to wars to civil rights leader Martin Luther King Jr. Later this month, finalists will be announced for a memorial to a group with less name recognition: Native American veterans.

In the 20th century, Native Americans served in the United States military at a higher per capita rate than any other ethnic group, and their service stretches back to the Revolutionary War. This might sound surprising, given their fraught history with the U.S. government. Why would so many choose to fight and sacrifice for a country that has often treated native tribes so badly?  Read more from Tara Bahrampour for The Washington Post.

Writers of The Atlantic reflect on President Donald Trump’s claim that he is “the least racist” subject. 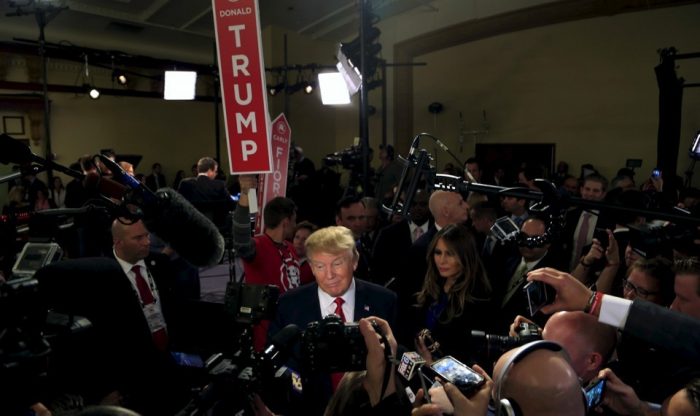 Reporter: What is your response to people who say you are a racist?

Trump: No, no, I’m not a racist. I am the least racist person you have ever interviewed, that I can tell you.

We at The Atlantic have a big room filled with experienced reporters. So we decided to ask some of them, Who was the least racist person you’ve ever interviewed? It is fair to say that none of the people identified as least-racist by our participants seemed to share many personality characteristics with the 45th president. Read more from the editors of the Atlantic and look for the reference to Lonnie Bunch, director of the National Museum of African American History and Culture.

This was Martin Luther King Jr.’s most ambitious dream (Opinion) 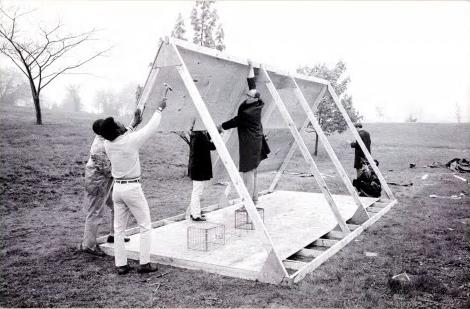 John Wiebenson and others build a structure at the Poor People’s Campaign in 1968. (Collection of the Smithsonian’s National Museum of African American History and Culture)

I was 14 when my parents took my brother and me to Washington to witness the masses gathering there. It was the spring of 1968, and thousands of African Americans, American Indians, Mexican Americans, Puerto Ricans, Asian Americans and poor whites from across the country had made their way to the Mall to protest the thing they all had in common: poverty.

They came by train, bus and car caravans. Some traveled by mule carts. They came from farm towns, big cities, the Appalachian hills and Native American reservations. It was the start of the Poor People’s Campaign. Read more from Lonnie Bunch for The Washington Post.

Mark Bradford confronts the myths of America’s past 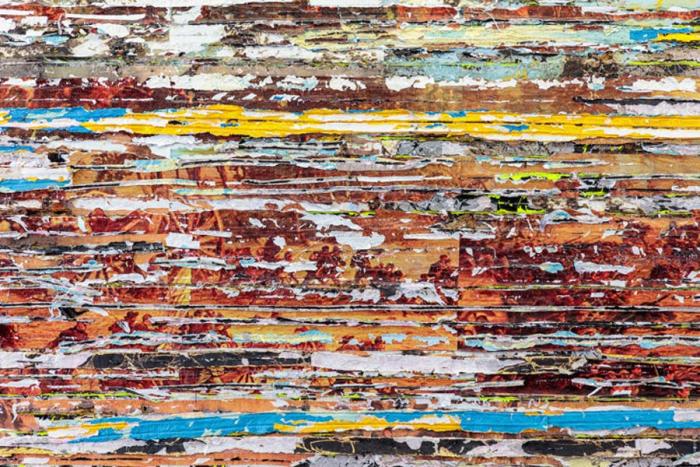 At a retreat a few years ago, curators from the Hirshhorn Museum and Sculpture Garden in Washington, D.C. held a brainstorming session to contemplate the museum’s most successful shows in recent memory. As director Melissa Chiu revealed, an exhibition’s success depended largely on whether it worked with or against the unique architecture of the Hirshhorn.

The building, designed by Gordon Bunshaft and opened to the public in 1974 as part of the Smithsonian’s constellation of museums on the US National Mall, was intended to serve as ‘a large piece of functional sculpture’, and its cylindrical walls, hollow centre, and curved galleries have at times fought with the artworks on display. Curators realised that the most effective exhibitions – Andy Warhol’s Shadows, for instance, in which 102 silkscreened and hand-painted canvasses extended around 450 linear feet of the museum’s curved walls – have embraced the space’s circularity. This insight led curators to begin dreaming of a commission for the museum’s third floor, a dream that culminated in the recent opening of Mark Bradford’s Pickett’s Charge, on display from November 2017 to November 2018. Read more from Jillian Caddell for Apollo. 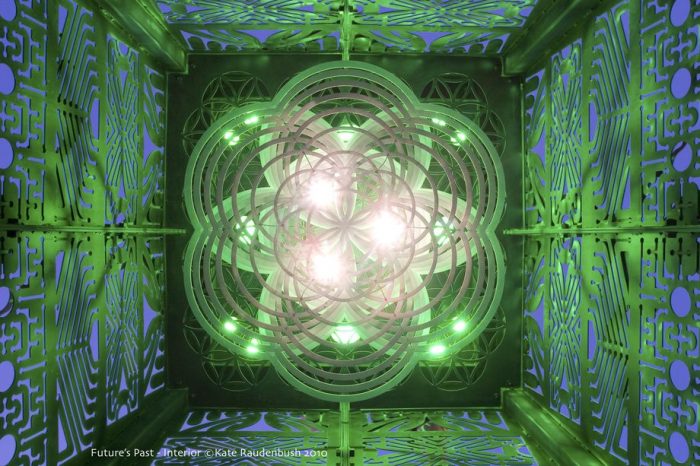 In Nevada, the Burning Man festival has turned into a cultural phenomenon that has lasted over 30 years. Starting this March, it will be on its way to the nation’s capital. In a collaboration between the Golden Triangle Business Improvement District (BID) and the Smithsonian American Art Museum’s Renwick Gallery, D.C.’s Downtown streets will feature six large-scale, immersive works by noted Burning Man artists.

This will be the first outdoor extension of the Renwick Gallery as part of their “No Spectators: Beyond the Renwick” exhibition. It will be on view from March 30, 2018 through January 21, 2019 with the outdoor portion exhibited through December 2018. Behind the exhibition is the museum’s Lloyd Herman Curator of Craft Nora Atkinson. Read more from Michelle Goldchain for Curbed.

‘I wanted to be a part of it so bad’: ‘Black Lightning’s’ Cress Williams is finally a superhero 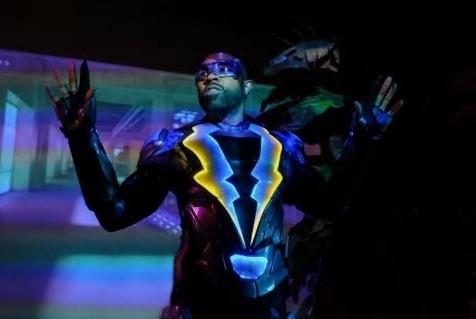 Cress Williams began to see his acting career taking off in the early 1990s, when Hollywood wasn’t taking superhero comic books nearly as seriously as it does today.

When that attitude started changing at the turn of the century, and heroes on the big screen and eventually on TV became big business, the 47-year-old always held out hope he’d get his chance to be one.

But with only so many black superheroes in mainstream comics out there to turn into live-action adaptations, Williams became convinced that he had aged out of the possibility of being a superhero. Read more from David Betancourt for The Washington Post.

The activist group founded by the artist Nan Goldin, who revealed her struggles with opioid addiction, says it intends to pressure museums to refuse the philanthropic family’s money>

The artist Nan Goldin and her newly formed activist group PAIN (Prescription Addiction Intervention Now) have launched an online petition calling for the Sackler family and Purdue Pharma to take responsibility for the opioid crisis in the US. The group demands that the Sacklers, whose fortune stems from the pharmaceutical company that created the prescription drug OxyContin, immediately pay for rehab treatment, opioid addiction education and the installation of “public dispensers of Narcan, the medicine that reverses an overdose, on every corner in America”.

The Change.org petition, which was launched on Friday with a link on the Instagram account @sacklerpain, insists that the Sackler family, which funds a number of arts organisations through its philanthropic foundations, “move their money into treatment and education”. The activist group says it intends “to put pressure on museums, art spaces and educational institutions to refuse future donations from the Sacklers” and “put social and political pressure on [the family] to respond meaningfully to this crisis”. Read more from Helen Stoilas for The Art Newspaper.

Frogs Tote Tiny Radios to Save Their Species

Scientists recently released hundreds of harlequin frogs to learn more about a deadly fungus pushing the species to extinction.

Hundreds of colorful frogs, barely the size of a palm, have been released into the wilds of Panama in the hopes of reviving a critically endangered species.

The variable harlequin frogs, raised in captivity at a Smithsonian’s Conservation Biology Institute facility in Panama are part of an experiment to see how the amphibians will fare in a country besieged by a pervasive and deadly disease. The population has declined by more than 80 percent over the last three generations, and in Panama, wild populations exist only in some protected areas. Read more from  Sarah Gibbens for National Geographic. 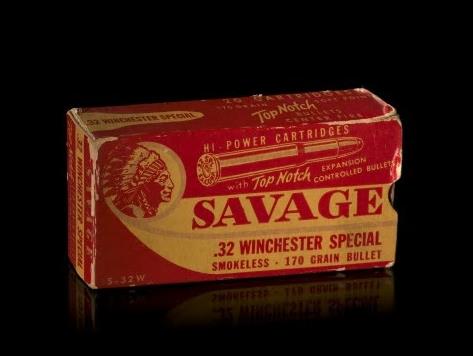 The National Museum of the American Indian has mounted an exhibition that could transform how the public thinks of the institution. Since it opened in 2004, the museum has struggled to find an audience, and to settle on a consistent approach to how it tells stories and presents information. With the opening of “Americans,” an exhibition that examines how images of native people have been fundamental to American culture, commerce and government, the museum and its curators have found a voice, and one every museum should emulate: They are going to address difficult questions with nuance and courage. Read more from Philip Kennicott for The Washington Post.