The Smithsonian’s National Portrait Gallery today unveiled its commissioned portraits of former President Barack Obama and former first lady Michelle Obama by artists Kehinde Wiley and Amy Sherald. The portraits were unveiled in a private ceremony as part of the Portrait Gallery’s 50th anniversary celebrations and will be on public display  beginning Feb. 13 in the renovated “America’s Presidents” gallery. 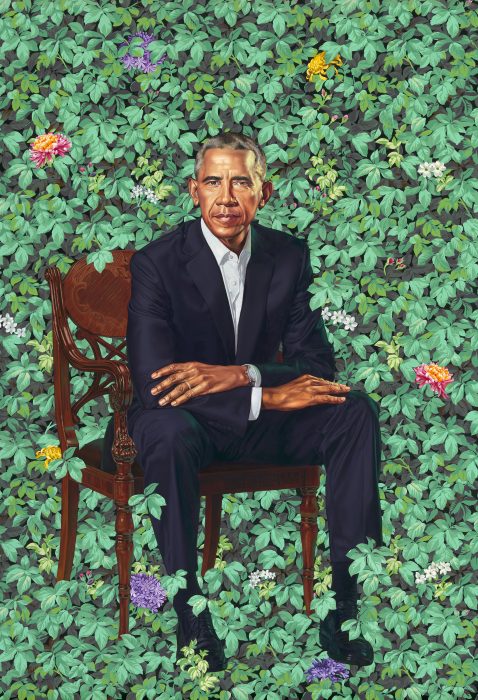 He sits, arms folded on his lap, and looks directly at the viewer. His expression is calm, his posture relaxed. He is a serious man surrounded by a luscious riot of foliage and flowers. She, too, is seated, unsmiling, with her chin on her hand, her famously toned arms exposed in a gown that pops with the colors of a Mondrian painting. But her hair, her skin, her eyes, are rendered in monochrome tones of gray. 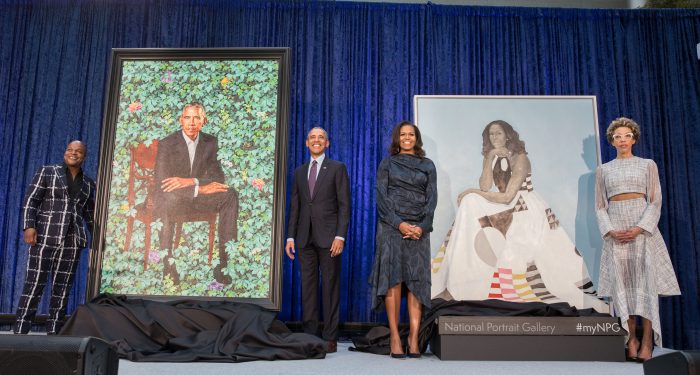 Before President Obama’s departure from office, he and Mrs. Obama selected Wiley and Sherald to paint their likenesses for the Portrait Gallery’s collection. This is the first time that African American artists have been commissioned for the National Portrait Gallery’s official portraits of a President or First Lady.

Barack Obama himself made history in 2009 by becoming the first African American president. The former Illinois state senator’s election signaled a feeling of hope for the future even as the U.S. was undergoing its worst financial crisis since the Great Depression. While working to improve the economy, Obama enacted the Affordable Care Act, extending health benefits to millions of previously uninsured Americans. Overseas, he oversaw the drawdown of American troops in the Middle East—a force reduction that was controversially replaced with an expansion of drone and aviation strikes. Though his mission to kill al-Qaeda founder Osama bin Laden was successful, his pledge to close the Guantanamo prison went unrealized. 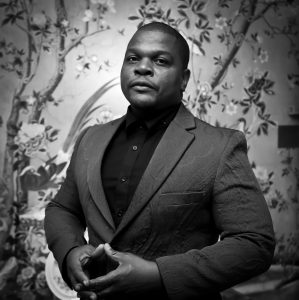 Throughout his career, Kehinde Wiley (b. Los Angeles, 1977) has garnered international recognition for his large-scale paintings of African Americans in poses resembling famous figures in the history of Western art. His rich, highly saturated color palette and his use of decorative patterns complement his realistic, yet expressive, likenesses. This portrait does not include an underlying art historical reference, but some of the flowers in the background carry special meaning for President Obama. The chrysanthemums, for example, reference the official flower of Chicago. The jasmine evokes Hawaii, where he spent the majority of his childhood, and the African blue lilies allude to his late Kenyan father.

Wiley earned a Master of Fine Arts from the Yale University School of Art in 2001. In 2008, the Portrait Gallery presented Wiley’s work as a featured artist in the museum’s “RECOGNIZE! Hip Hop and Contemporary Portraiture” exhibition.

Michelle Obama remembers growing up on the South Side of Chicago and thinking, “being smart is cooler than anything in the world.” After earning degrees from Princeton University and Harvard Law School, she joined Sidley Austin LLP, where she met Barack Obama in 1989. Guided by the desire to improve her community, she left the firm in the mid-1990s to begin a career in public service. She directed community and external affairs for the University of Chicago Medical Center prior to moving to Washington in 2009. 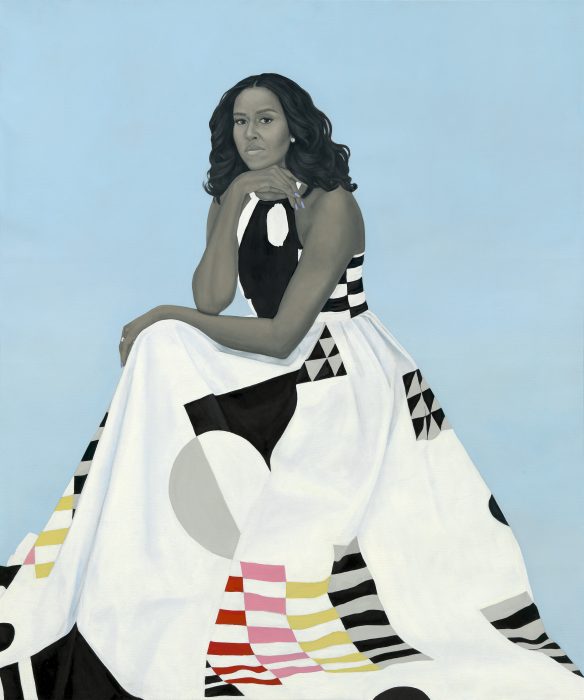 During her husband’s two presidential campaigns, Mrs. Obama delivered poignant speeches that cen-tered on her family’s commitment to serving others and highlighted the importance of her role as a parent. As first lady, she focused on women’s rights, LGBTQ rights, children’s health, and military families.

Mrs. Obama selected Amy Sherald, the first woman to win the Portait Gallery’s prestigious Outwin Boochever Portrait Competition, to create her official portrait for the museum. The Baltimore-based artist considers the former first lady to be someone “women can relate to—no matter what shape, size, race, or color. . . . We see our best selves in her.”

In this oil-on-linen painting, Sherald depicts the former First Lady as both confident and approachable in a dress by Michelle Smith’s label Milly. 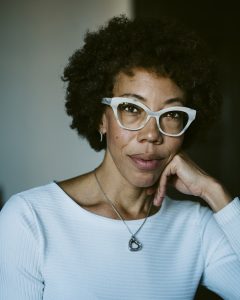 Sherald (b. Columbus, Ga., 1973) is known for her stylized, archetypal portrayals of African Americans. A personification of resilience herself amidst challenges from a heart condition, Sherald conveys the inner strength of her subjects through a combination of calm expressions and confrontational poses. She often paints in gray-scale. Sherald has said, “Gray makes the paintings work. But it’s a way for me to subversively comment about race without feeling as though I’m excluding the viewer.”

“For 50 years, the National Portrait Gallery has told the story of America through the people who have impacted this country’s history and culture,” director Kim Sajet said. “We are thrilled to present to the nation these remarkable portraits of our 44th president, Barack Obama, and former First Lady, Michelle Obama, painted by two of the country’s most dynamic contemporary artists., Kehinde Wiley and Amy Sherald. As a museum of history and art, we have learned over the past half-century that the best portraiture has the power to bring world leaders into dialogue with everyday Americans. These two paintings fall into that category, and we believe they will serve as an inspiration for generations to come.”

The portraits were unveiled in a private ceremony as part of the Portrait Gallery’s 50th anniversary celebrations and will be on public display  beginning Feb. 13 in the renovated “America’s Presidents” gallery. 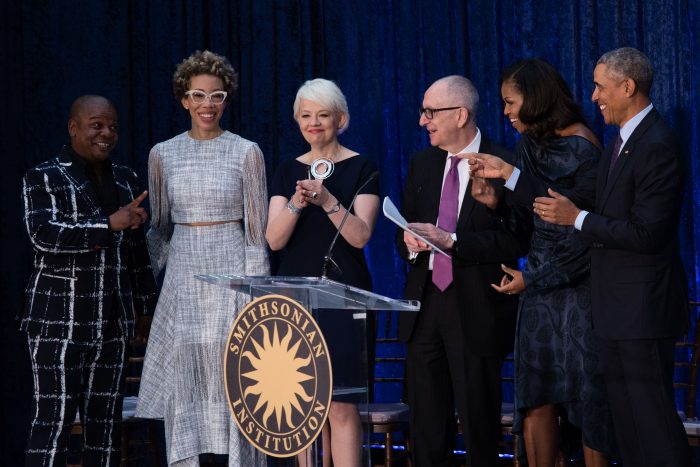 Read Phillip Kennicott’s review for The Washington Post: The Obamas’ portraits are not what you’d expect, and that’s why they’re great