Prior to his career at the Smithsonian, Dr. Robinson served as an international relations specialist for NASA  and as legal counsel for the Federal Aviation Administration under the U.S. Department of Transportation. 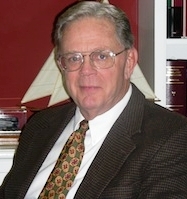 Dr. Robinson was a graduate of the St. Albans School in Washington, D.C., and  Bowdoin College in Maine. He was awarded a juris doctor degree from the University of Virginia School of Law, and was the first in the world to earn a doctor of civil laws degree in Space Law from the McGill University Institute of Air and Space Law in Montreal.

Upon his retirement from the Smithsonian in 1995, Dr. Robinson established with his sons the firm of Robinson and Robinson, LLC,  now The Robinson Law Firm ,where he served as partner and later as of counsel. Dr. Robinson’s practice concentrated on corporate and nonprofit organizations, intellectual property, mergers and acquisitions, healthcare, and international space law.

Over the years Dr. Robinson taught and lectured in law and business relating to international space commerce at numerous universities in the United States and abroad, including George Mason University, Oxford University, McGill University, George Washington University, and Georgetown University. He also served on the Board of Directors at various science research facilities, foundations and hospitals.

Dr. Robinson also initiated various space-related publications, including the Journal of Space Philosophy and Space and Evolution. He participated directly in the formulation and establishment of the first Space Law Moot Court Competition between law schools in the greater Washington, D.C., area. The competition later evolved into a well-established and highly regarded annual moot court competition sponsored by the University of Mississippi and the International Institute of Space Law. He was also a longtime member of the Cosmos Club in Washington, D.C. where he was the editor of the Cosmos Journal.

Dr. Robinson spent his career promoting and promulgating many aspects of space exploration and commerce along with the laws needed to support these activities. In partial recognition of Dr. Robinson’s unique contributions to innovative development of domestic and international space law, the McGill University’s Institute of Air and Space Law in Montreal, Canada dedicated to him one of its annual publications “Annals of Air and Space Law.” Later McGill University established the George S. and Ann K. Robinson Space Law prize that awards a scholarship to a graduating student at the Institute of Air and Space Law on the basis of the student’s successful doctoral thesis exhibiting advanced and innovative research capabilities and constituting an original contribution to space jurisprudence.

The family asks that any donations be made to the George S. and Ann K. Robinson Space Law Prize to fund scholarships for graduate students of McGill studying Air and Space Law:

Before Camelot, JFK was ‘Citizen Cane’