Home Science Air and Space Museum Character, courage and “The Spirit of Columbus”

Today marks the 55th anniversary of the first solo around-the-world flight made by a woman. On March 19, 1964, Geraldine “Jerrie” Mock departed Columbus, Ohio, in a 1953 Cessna 180 single-engine monoplane, Spirit of Columbus. Twenty-nine days, 11 hours, and 59 minutes later, she landed back in Columbus, the first woman to fly around the world alone. 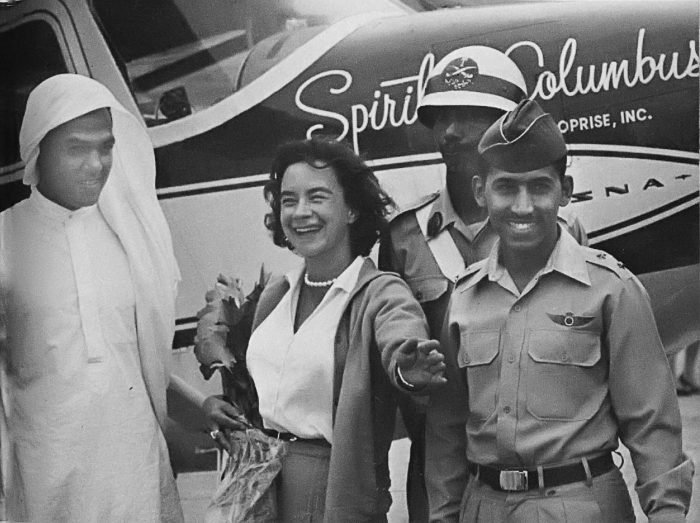 On April 3, 1964, Jerrie Mock stood next to her Cessna 180 at Dhahran Airport in the Kingdom of Saudi Arabia. The crowd of men before her looked puzzled and then one of them dashed forward to look into the cockpit. In her book Three-Eight Charlie, Mock recalled: “His white-kaffiyeh-covered head nodded vehemently, and he shouted to the throng that there was no man.  This brought a rousing ovation.”

What in the world was an American woman doing flying a plane alone to Saudi Arabia where no woman was allowed to drive a car? Well, actually Geraldine “Jerrie” Mock was flying her Cessna around the world and she was already two weeks into a flight that no woman had yet completed, not even the indomitable Amelia Earhart.  On her round-the-world attempt with her navigator Fred Noonan in 1937, Earhart disappeared without a trace into an afterlife of speculation and theory. Now, 27 years later, here was Jerrie Mock, a mother of three with 750 hours of flight time, a newly-minted instrument rating, and a determination to see the world.  She also had a 1953 Cessna 180, a rugged single-engine four-seat airplane officially named Spirit of Columbus, for her Ohio hometown, but which she affectionately called Three-Eight Charlie, per its registration number N1538C, or simply Charlie, the aviation alphabet code word for “C.” Today, Charlie is suspended at the Museum’s Steven F. Udvar-Hazy Center where it celebrates Jerrie Mock as the first woman to fly around the world (March 19-April 17, 1964). 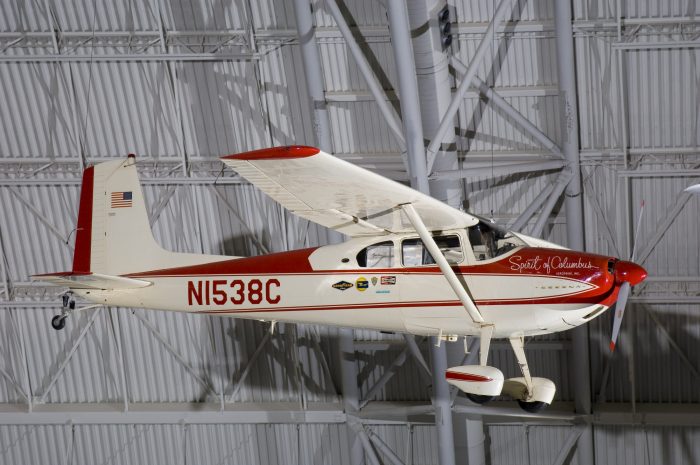 While a far cry from the average pilot of the era, defined as a male weighing 180 pounds, the petite Mock was also not your average suburban wife — to be honest, she was bored, and so she earned her pilot license at age 32.  She and her husband Russell loved to fly around the Midwest and but she longed to visit countries she had always dreamed of as a child. Russ suggested a world flight and Jerrie enthusiastically said why not?  So Russ and co-owner Al Baumeister outfitted the high-wing Cessna with dual directional finders and short-range radios, a long range high-frequency radio with trailing wire, an autopilot and three extra fuel tanks to extend its range to an impressive 3,500 miles. The Columbus Dispatch newspaper signed on as a major benefactor, while Cessna, Javelin Aviation, and others assisted as well.  Mock prepared her routing, with help from an Air Force friend, making sure she would exceed the required official distance for a round-the-world flight of 36,788 kilometers (22,858.8 miles) and she gathered all required paperwork for the flight.  She would even forsake her slacks for a more diplomatic drip-dry skirt and sweater set (taking off her high-heels while flying but looking all the while as a woman off to bridge club instead of flying around the world). 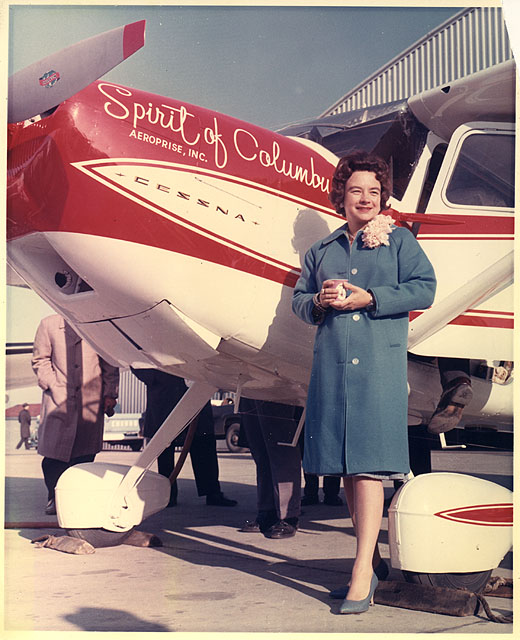 Geraldine L. “Jerrie” Mock poses beside the nose of her Cessna 180 Spirit of Columbus at Port Columbus Airport, Columbus, Ohio, March 19, 1964, immediately before she takes off on her record setting solo flight around world in single engine plane. She was first woman to do so.

The tone of the flight changed dramatically when the National Aviation Association informed her that another woman, Joan Merriman Smith, was also considering a world flight; Mock quickly submitted her final paperwork as the official pilot seeking the first female round the world record. When Mock learned Smith would depart in her twin-engine Piper Apache in mid-March, to follow Earhart’s equatorial route, she moved up her departure from April 1 to March 19, two days after Smith. With a kiss to her husband and children, the “flying housewife” departed Port Columbus Airport, Ohio, eastbound for Bermuda. After dueling with icing over the Atlantic and sandstorms along the African coast, she inadvertently landed at Inchas Air Force Base in Egypt to be met by armed soldiers.  Perhaps a male pilot would have been detained, but the bewildered soldiers kindly pointed out nearby Cairo International Airport a few miles away and, after dark, cleared her for take-off.  While there she crossed off one of her life goals, visiting the pyramids. Perhaps it was her optimistic, practical nature that carried her through, along with attention to detail (Earhart take note) and a measure of good luck; Smith was not so lucky, beset with mechanical problems. Diplomatic and military officials and local aero clubs often greeted her but Mock could find her own way around a town too. She relished the dramatic cultural changes in food and dress, as women’s full dark hijabs in the Middle East bloomed into brightly-colored saris or pantaloons of India. She became keenly aware of the dramatic difference in flight rules and the near total absence of the American concept of general aviation; controlled airspace and airports meant red-tape, delays, and outlays of cash. She worried: “Do you think it could ever get like this at home?” As she flew over Vietnam on a 13-hour flight from Bangkok to Manila, she noted: “Somewhere not far away a war was being fought, but from the sky above, all looked peaceful.” 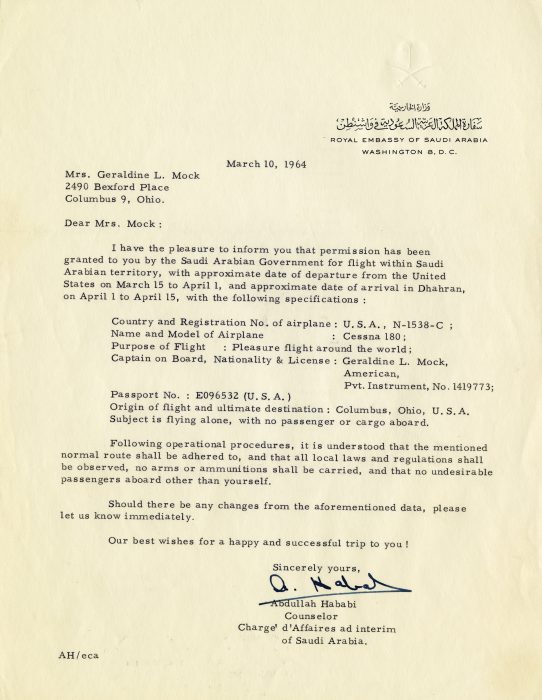 A landing permit for Jerrie Mock’s flight to Saudi Arabia during her round-the-world trip in 1964. (National Air and Space Museum, Smithsonian Institution)

With her four longest flights over the Pacific still ahead of her, the press only wanted to talk about the unfortunate Earhart. Undaunted because she had the proper equipment and training, Mock flew on without a hitch except for missing a luau in Hawaii — canceled by her overzealous husband who thought  she would need the sleep (shades of Earhart’s husband-manager George Putnam?). On April 14, she flew the final and longest ocean leg of 3877 km (2,409 miles) from Honolulu to Oakland, California, and she arrived home in Columbus on April 17. President Lyndon Johnson presented her with the Federal Aviation Agency’s Gold Medal for Exceptional Service on May 4, 1964; however she did not win the female Harmon Trophy for that year – it went instead to Joan Merriam Smith who completed her flight 25 days after Mock.  Perhaps Smith’s death in early 1965 had something to do with that. Mock later set several more distance and speed records. 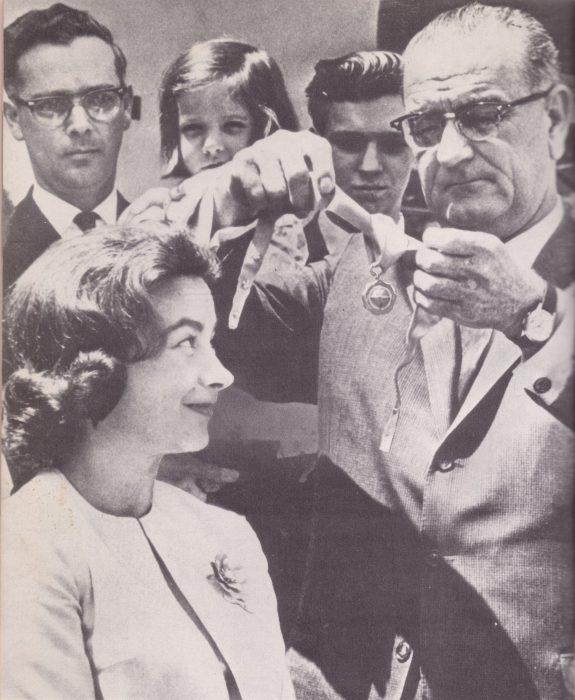 Why did it take so long for this world flight to be accomplished? After Earhart’s loss it appears that no woman had even made a serious attempt.  To be sure, World War II banned general aviation but though the annual All-Woman Transcontinental Air Race began in 1948, this great adventure remained.  Potential pilots such as Jerrie Cobb come to mind but the most accomplished female pilot of the day, Jacqueline Cochran, who also had the money, never considered the flight.  Cochran instead set her sights on becoming the first woman to fly the speed of sound and eventually set more records than any man or woman of the era.  Perhaps it was her friendship with Earhart that made Cochran shy away from this one — she had feared for Earhart’s safety and indeed was not surprised when Earhart disappeared. Whatever the reasons, Jerrie Mock made the flight and earned her place in aviation history.  Today, she is as spunky as ever and she is still awaiting a movie on her record adventure — Hollywood please take note. In 2007, she participated in the Air and Space Museum’s Become a Pilot Family Day, held each June at the Udvar-Hazy Center. Independent as ever, the octogenarian refused to fly in a commercial airliner, instead making the trip from Florida as a passenger in the familiarity of two small general aviation airplanes. In honor of the 50th anniversary of Mock’s world flight, a display of selected paperwork, photographs, and her sunglasses is in the General Aviation exhibit station case at the Udvar-Hazy Center, not far from her beloved Charlie, both testaments to the character and accomplishments of Jerrie Mock.

This post was originally published by the National Air and Space Museum’s blog.