Home Science Astrophysical Observatory The “Oscar of Science” goes to…

The Event Horizon Telescope Collaboration, headed by Collaboration Director Shep Doeleman  of the Harvard-Smithsonian Center for Astrophysics have been awarded the prestigious Breakthrough Prize in Fundamental Physics for the first image of a supermassive black hole, taken by means of an Earth-sized alliance of telescopes. Doleman will accept on behalf the collaboration. The $3 million prize will be shared equally with the 348 scientists co-authoring any of the six papers published by the EHT on April 10, 2019, which can be found here: https://iopscience.iop.org/journal/2041-8205/page/Focus_on_EHT.

Using eight high-powered radio telescopes strategically positioned in Antarctica, Chile, Mexico, Hawaii and the continental United States, a global collaboration of 348 astrophysicists at 60 institutions in 20 countries photographed a black hole for the first time, targeting the supermassive black hole at the center of the Messier 87 galaxy – its mass equivalent to 3.5 billion suns. After synchronizing their snapshots to within a fraction of a trillionth of a second, and painstakingly analyzing the data with novel imaging techniques, the team produced a composite image of this galactic monster silhouetted against a blurry ring of light that had escaped its pull.

About the Breakthrough Prize

Now in its eighth year, the Breakthrough Prize, known as the “Oscars of Science,” is awarded by the Fundamental Physics Prize Foundation, a not-for-profit organization dedicated to recognizing achievements in the life sciences, fundamental physics and mathematics, disciplines that ask the biggest questions and seek the deepest explanations. The Breakthrough Prize was founded by Sergey Brin, Pony Ma, Yuri and Julia Milner, Mark Zuckerberg and Priscilla Chan, and Anne Wojcicki.

Considered the most generous academic prize in the world, the $3 million prize is more than twice the amount given to the Nobel Prize awardees.

The new laureates will be recognized at the eighth annual Breakthrough Prize gala awards ceremony on Sunday, November 3, at NASA Ames Research Center in Mountain View, California, and broadcast live on National Geographic.

April 10, 2019 CfA scientists have achieved what was thought to be impossible–the first image of a black hole.

Smithsonian researchers have been staring at the sky since the Institution’s founding. In fact, in 1851, our first Secretary, Joseph Henry, faced criticism for the Institution’s studies of the moon, rather than focusing on something “useful” like agriculture. Henry responded that the criticism might hold water if “the highest cravings of the human soul were confined to the desire for good potatoes.”

Today, Henry’s words proved prescient, when Sheperd (Shep) S. Doeleman of the Center for Astrophysics | Harvard & Smithsonian (CfA), announced at a National Science Foundation press conference, “We are delighted to be able to report to you today that we have seen what we thought was unseeable. We have taken the first picture of a black hole.” 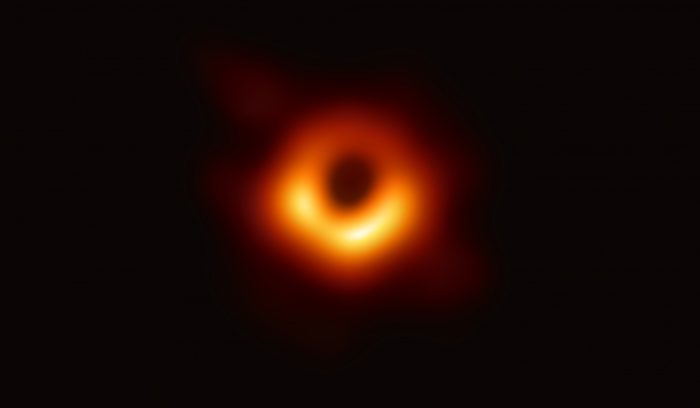 The Event Horizon Telescope (EHT) — a planet-scale array of eight ground-based radio telescopes forged through international collaboration — was designed to capture images of a black hole. In coordinated press conferences across the globe, EHT researchers revealed that they succeeded, unveiling the first direct visual evidence of the supermassive black hole in the centre of Messier 87 and its shadow. The shadow of a black hole seen here is the closest we can come to an image of the black hole itself, a completely dark object from which light cannot escape.

Captured by the Event Horizon Telescope, a global array of radio telescopes involving dozens of institutions and hundreds of scientists, the image reveals the supermassive black hole at the center of Messier 87, a massive galaxy 55 million light years away.

“This fulfills our dream to take the first picture of a black hole,” said Doeleman, the director of the EHT at CfA. “We now have access to a cosmic laboratory of extreme gravity where we can test Einstein’s theory of general relativity and challenge our fundamental assumptions about space and time.”

Black holes are extremely compressed cosmic objects, containing extraordinary amounts of mass within a tiny region. (This one contains 6.5 billion times the mass of the Earth’s sun.) This mass is shrouded by an event horizon, the boundary beyond which nothing—not even light—can escape from the black hole’s powerful gravitational pull.

The presence of these objects affects their surroundings in extreme ways, including warping spacetime and heating surrounding material to hundreds of billions of degrees. General relativity predicts that a black hole will cast a circular shadow upon this bright, glowing material. The newly released image of M87 from the EHT reveals this shadow.

“For decades, we have studied how black holes swallow material and power the hearts of galaxies,” said Ramesh Narayan, a Harvard University professor and a leader in EHT theory work. “To finally see a black hole in action, bending its nearby light into a bright ring, is a breathtaking confirmation that supermassive black holes exist and match the appearance expected from our simulations.”

While astronomers have studied black holes for many years, making an image requires a new telescope with unprecedented resolution so it can detect fine details. To create this, the EHT combines the signals from an array of eight existing telescopes around the globe, including the Submillimeter Array (SMA), located on Maunakea in Hawai’i.

Turning the EHT data into an image required developing new methods and procedures. “We weren’t ready to publish our images until after trying to break them in every way possible,” said Andrew Chael, a Harvard graduate student at the CfA, who developed a new imaging software library for the EHT. “To confirm our results, we compared images among four independent groups of scientists using three different imaging methods.” These tests were designed and led by Katie Bouman, a CfA postdoc who received her doctorate in electrical engineering and computer science. Bouman said, “We’re a melting pot of astronomers, physicists, mathematicians and engineers, and that’s what it took to achieve something once thought impossible.”

“Over the past decade, the greatest accomplishment has been the building of a team,” said Doeleman at the April 11 press conference revealing the image. Capturing this image is “the equivalent of being able to read the date on a quarter in Los Angeles from here in D.C.”

Michael Johnson, a CfA astrophysicist who directs local EHT science and imaging efforts, is excited for the future. “Our image reveals that this enormous black hole—large enough to engulf the solar system—anchors a jet that extends tens of thousands of light years. Expanding the EHT may enable movies that reveal the dynamics of this living system, showing how the jet draws its energy from the black hole.”

Doeleman agrees that there is much more to be done. “As with all great discoveries, this is just the beginning.”

For more information on the EHT and this groundbreaking result, visit eventhorizontelescope.org and follow @ehtelescope on social media. The website for the CfA, which is organized into six research divisions to study the origin, evolution and ultimate fate of the universe, is cfa.harvard.edu.

The six papers reporting these results in the Astrophysical Journal Letters are:

Event Horizon: Peering to the edge of a Black Hole

When galaxies collide, a star-shredder is born