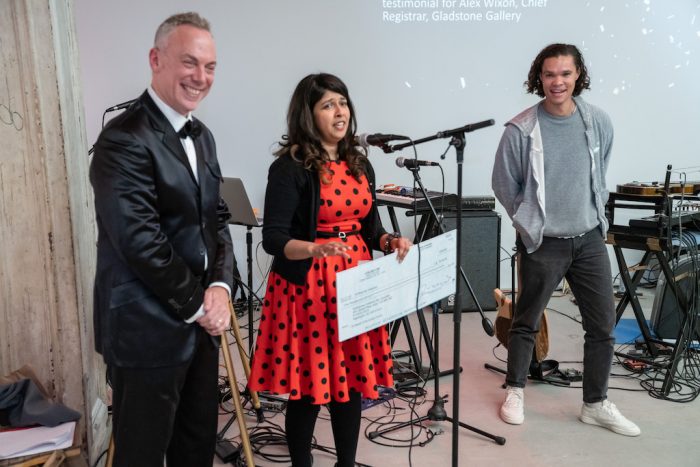 Rajshree Solanki, who, as chief registrar, is responsible for managing the 12,000 works held by the Hirshhorn Museum and Sculpture Garden in Washington, D.C., received the first annual Registrar of the Year award at a ceremony at Artists Space in New York on Wednesday. The newly created prize, which was established by the fine-art logistics company Atelier 4, comes with $5,000, and was presented after a multipart nomination and judging process.

However, Solanki will not be taking home the money. She plans to donate the purse to the Smithsonian Institution’s Office of Fellowships and Internships to support its minority internship program, which the registrar herself participated in at the start of her career.

“It seemed more important to put forth good energy into the universe and the hope is that we can create a situation where more students would be interested in collection management and registration,” Solanki told ARTnews, adding that she hopes a more diverse group of people will enter the field in coming years.

Solanki said that it was an “honor to be recognized” with the award. Though “registrars are definitely behind the scenes,” she said, they “wear so many hats,” dealing with legal issues, risk management, budgets, shipping logistics, and more at art institutions. In addition to her work at the Hirshhorn, she has assisted the Historical Society of Washington, D.C., with moving its collections, and early this year, during the longest federal government shutdown in U.S. history, Solanki organized a Facebook support group for furloughed federal employees.

Art Handler magazine founder and editor-in-chief Clynton Lowry, who judged the award, said in a statement, “Solanki stands out for her willingness not just to take responsibility and care for the well-being of priceless objects, but for the lives of those around her. From her colleagues she works with every day, to the volunteer work she committees to, Solanki makes the world around her a better place.”