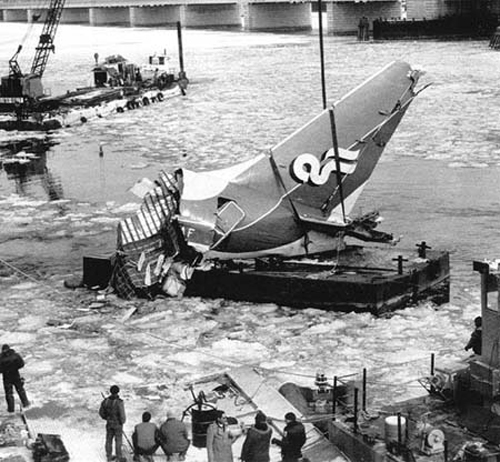 The tail of Air Florida Flight 90 is visible during the recovery effort after the jet crashed into the Potomac River during a snowstorm on January 13, 1982. This photo was taken January 19, 1982. Source: Washington Weather

January 13, 1982 Smithsonian staff, dismissed from work early because of a snow storm, are caught between two terrible accidents: a Metro derailment just north of the Smithsonian station and the tragic crash of Air Florida Flight 90 into the 14th Street Bridge that took the lives of 78 people, including Smithsonian Tropical Research Institute scientist Robert Elliot Silberglied. Most staff are given administrative leave on Thursday, Jan. 14, as well. The National Zoo is closed from the 13th through the 15th. Phone traffic is so heavy on the main telephone switchboard that the mechanical answering machine breaks down on Wednesday evening at about 6:30 p.m.