Author of more than 20 peer-reviewed articles and with three decades of experience at the Smithsonian Tropical Research Center, Dr. Oris Sanjur takes the the helm as Acting Director. 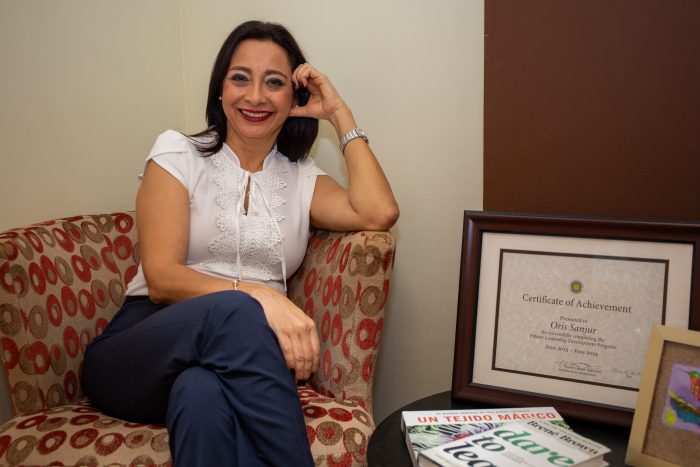 Dr. Oris I. Sanjur, Acting Director of the Smithsonian Tropical Research Institute. To her left is a certificate noting her participation in the Palmer Leadership Development Program. (Photo courtesy STRI)

Dr. Oris I. Sanjur is the acting director of the Smithsonian Tropical Research Institute,  headquartered in Panama City, Panama. The Institute furthers the understanding of tropical nature and its importance to human welfare, trains students to conduct research in the tropics and promotes understanding of present and past biological diversity by increasing public awareness of the beauty and importance of tropical ecosystems. Sanjur succeeds Matthew Larsen who retired in June 2020.

Sanjur oversees 420 employees, an annual budget of $35 million, research facilities throughout Panama and field sites in Africa, Asia and the Americas. In addition to its resident scientists, the Institute’s facilities are used annually by some 1,400 visiting scientists from academic and research institutions in 50 countries. Visitors include more than 800 students, interns and pre- and postdoctoral fellows. STRI also welcomes upwards of 100,000 visitors per year to four public programs sites.

Sanjur began her association with STRI in 1989 as an Exxon fellow working on her undergraduate thesis project. Before appointed acting director, she was the associate director for science administration with organization-wide programmatic and administrative responsibilities, including oversight of STRI’s research facilities and collections, operational support for research programs, and liaising with government and non-government organizations. In addition, she participates and represents STRI at various institutional initiatives such as SI Barcode of Life and the Pan-Smithsonian Cryo-Initiative, among others. She has published more than 20 peer-reviewed articles and presented more than 20 papers at scientific meetings.

In 2013, Sanjur was selected as one of the 10 pioneering women in science in Panama; in 2014, as one of the nine members of the National Electoral Board for the Panamanian presidential elections; and was honored as “Distinguished Woman of the Year 2015” by the Panamanian Association of Business Executives. In 2019, she was named one of Panama’s “most influential” women and included in the book “Those Who Inspire—Panama.” She is currently a member of International Women’s Forum—Panama.

She is currently a member of the Panamanian Association for the Advancement of Science (APANAC), Ciencia en Panamá (CeP), the Panama Director’s Association (ADP), and the International Women Forum (IWF).