So that happened: the most popular, newsworthy and only-at-the-Smithsonian posts from an eventful 2016.

Don’t let the door hit you on the way out.

Celebrate 40 years of science at the Smithsonian Conservation Biology Institute in Front Royal, Va. We’ve made great strides in helping to save the giant panda, clouded leopard and many other species through our work there. Read more and watch the video.

Celebrating 20 Years in Your Neighborhood 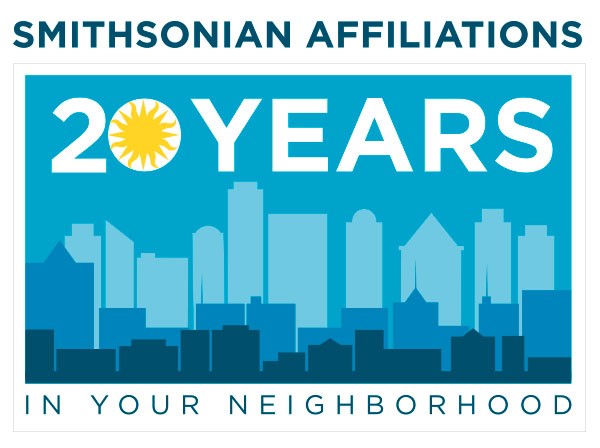 Sometimes you just can’t find a notepad handy when you need one. A new 3D digitization effort by the Air and Space Museum showed that even astronauts will scribble notes on the wall. Read their notes. 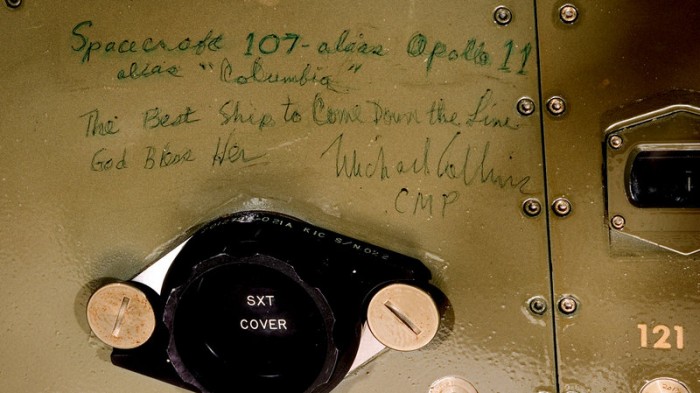 While 3D scanning the Apollo 11 Command Module Columbia, museum staff uncovered writing on its interior walls. Among the notations is this tribute to the Cpmmand Module itself signed by mission commander Michael Collins. (NASM photo)

Just how DO you get to the top of the food chain?

Every child knows that the “Tyrant Lizard King” was the biggest, baddest dinosaur of them all. But how did Tyrannosaurus rex and its close relatives become such fearsome predators? The fossilized remains of a newly discovered horse-sized dinosaur revealed the answer. Read more about the research and meet the scientist behind it. 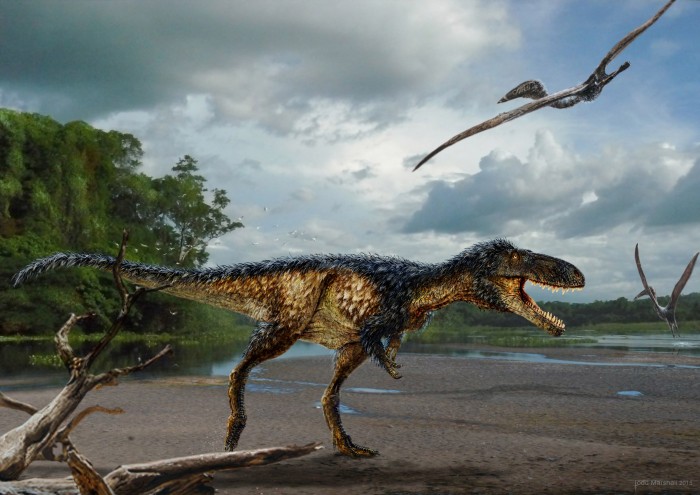 Life reconstruction of the new tyrannosaur Timurlengia euotica in its environment 90 million years ago. It is accompanied by two flying reptiles (Azhdarcho longicollis). Original painting by Todd Marshall

Any Castle worth its sandstone has to be at least a little bit haunted. Our own Castle has seen more than its fair share of sudden death, apparitions and things that go bump in the night. Read more for some unseasonable spookiness. 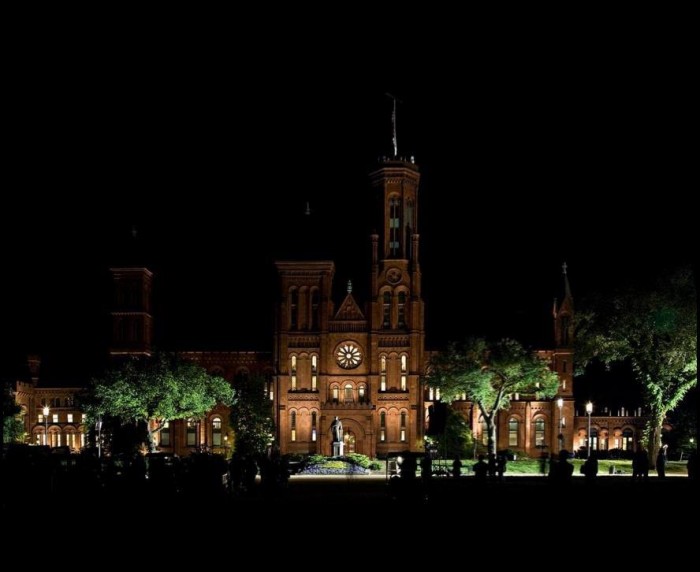 The Castle’s dramatic lighting is not supernatural, but preparation for a 2008 film shoot for “Night at the Museum.” Photo by James Di Loreto.

We showcased the Smithsonian at its best in May with a thought-provoking exhibition at the Zoo, an historic trip to Cuba and a celebration of our own unsung heroes.

Washed ashore: Art to Save the Sea

More than 315 billion pounds of plastic pollute our oceans, including the Great Pacific trash vortex, a vast patch of plastic debris that some estimates calculate as being twice the size of the continental United States. Watch Laurie Penland’s video and see some of the art created from trash.

Viejos amigos: The Smithsonian and Cuba

As the U.S. moves to normalize relations with Cuba, Secretary Skorton discusses the Smithsonian’s long history with the island nation and offers some insight into our future plans there. Read more about the Secretary’s trip and view an interactive timeline of the Smithsonian’s relationship with Cuba.

Going the Extra Mile Every Day: The 2016 Unsung Hero Awards

We all hear about the superstars—the colleagues who make scientific breakthroughs or uncover brilliant young artists or unravel historic mysteries—but what about those colleagues who do exceptional work at indispensable jobs that never make the news? Meet this year’s Unsung Heroes, Smithsonian staff who, day in and day out, make the Smithsonian a great Institution. Meet our 2016 Unsung Heroes.

Victoria and Albert and…James? The Smithsonian goes to London

Two years ago, the Mayor of London’s Office approached the Smithsonian to explore our possible interest in participating in the redevelopment of the former Olympic Park in East London as part of a new educational and cultural quarter in the city.

In June, Secretary David Skorton announced that the Smithsonian and the Victoria & Albert Museum in London are moving forward on a collaboration that will result in the Institution’s first permanent exhibition space outside of the United States. Read the Q&A with Dr. Skorton.

A multi-segment panoramic image of the London skyline from the Bermondsey banks of the Thames. (Photo by David Iliff. License: CC-BY-SA 3.0)

We stayed up too late and ate too much in July, but that’s what summer’s all about!

All Night at the Museum

Max Kibblewhite spent all night at the Air and Space Museum to celebrate the 40th anniversary of the iconic building and lived to tell about it. Here’s the report. 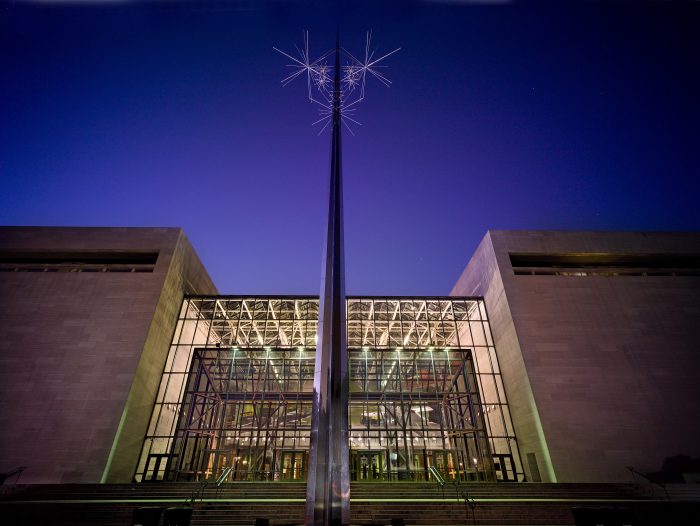 The National Air and Space Museum’s flagship building as seen from the National Mall. Richard Lippold’s sculpture, “Ad Astra” (“To the Stars”) is in the foreground. (Photo by Eric Long)

As is traditional, the day of the Smithsonian Staff Picnic was blindingly hot and stiflingly humid, but as is also traditional, that didn’t keep everyone from having a great time! Share the fun. 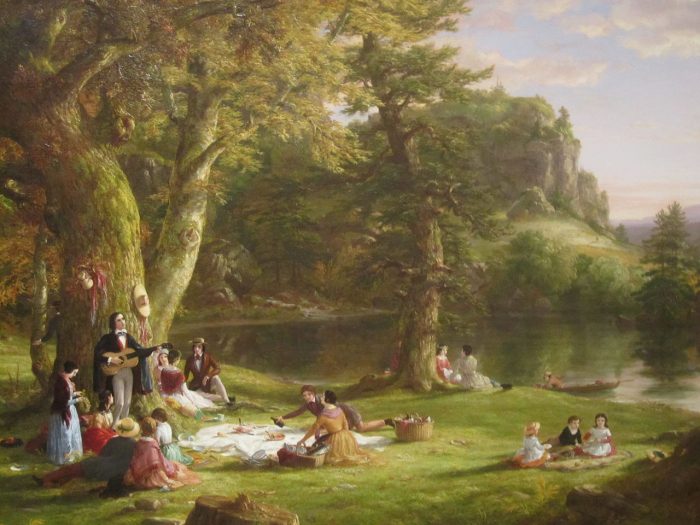 The Picnic, Thomas Cole, 1845. Courtesy The Brooklyn Museum. Note: This is not the actual 2016 Smithsonian Staff Picnic. In case you were confused.

In August, we showcased the importance of preserving both our natural and cultural heritage.

Great Smoky Mountains National Park, Tennessee
A view of Roaring Fork in Great Smoky Mountains National Park, Tennessee, 2002. World renowned for its biological diversity, there are more than 19,000 species documented in the park. Scientists predict an additional 30,000–80,000 may yet be identified.
Smithsonian connection: Through an ongoing All Taxa Biodiversity Inventory, scientists, including Smithsonian biologists, have contributed to a better understanding of the park’s moths, leeches, oaks, birds and beetles. (Photo by Stan Jorstad)

It takes a village to save the village

When disaster strikes, whether natural or manmade, we rush first to aid the injured, succor the survivors and bury the dead. But once the flood waters recede, the aftershocks quiet and the horrors of war dim, we are faced with other casualties: the damage to and loss of the art, architecture and other aspects of our irreplaceable cultural heritage. Learn more about the First Aid to Cultural Heritage in Times of Crisis program. 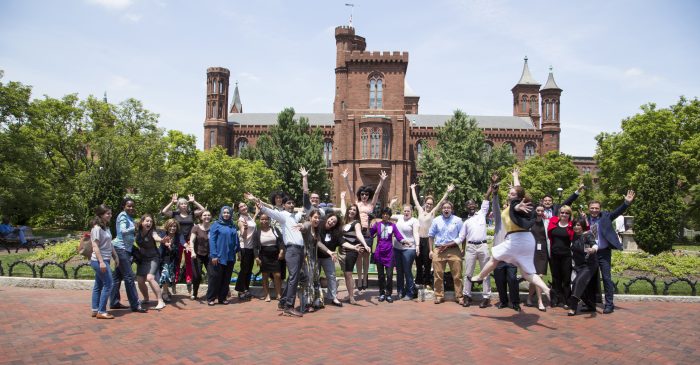 FAC 2016! The International Course on First Aid to Cultural Heritage in Times of Crisis was held for the first time in Washington, D.C., at the Smithsonian in June. Here, FAC participants gather behind the Castle for a group photo before the opening ceremony. (Photo by Stacey Bowe)

We took a tour through the collections and welcomed a baby orangutan in September but let’s face it, most of the month was spent anticipating the new National Museum of African American History and Culture.

With over 138 million collection objects, 2.1 million library volumes, and 137,000 cubic feet of archives, the stories of how our collections have made their way to the Smithsonian are almost as varied as the collections themselves. From a tiny mosquito to a space shuttle, we’ve seen, and moved, it all. This is an ode to all the collectors and movers that have made the Smithsonian what it is today. Take the tour.

For the first time in 25 years, a baby orangutan has been born at the National Zoo. The male Bornean orangutan was born at 8:52 p.m. Sept. 12 to 19-year-old mother Batang. Read more and watch video of Batang with her infant, Redd. 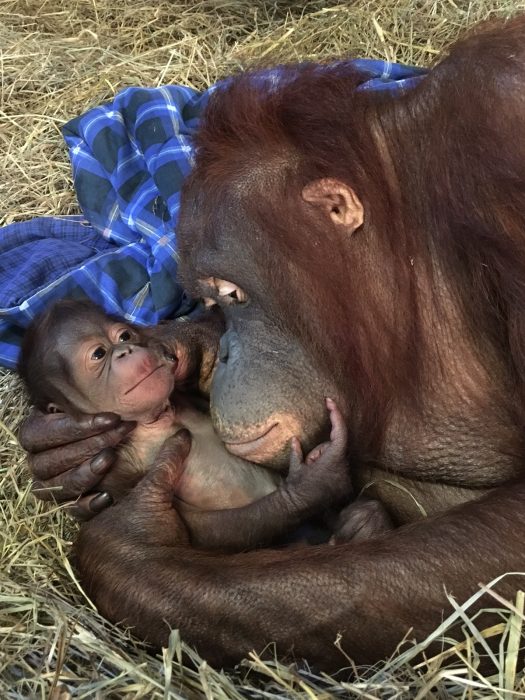 We were all about engagement in October with the debut of a new podcast and an in-depth look at accessibility for staff and visitors alike.

Open the door to the unexpected

Sidedoor is a brand-new, one-of-a-kind, totally unexpected podcast that could only come from the Smithsonian. The program connects big ideas to the people who have them through stories about science, art, history and humanity–and their unexpected intersections. Listen to the first two episodes and find out more about the project from cohost Tony Cohn.

October is National Disability Employment Awareness Month. We highlighted diversity at the Smithsonian with a special series by Max Kibblewhite on accessibility, accommodation, resources and programs.

#InclusionWorks: National Disability Employment Awareness Month: In part one, we define our terms and give a preview of what’s ahead.

#InclusionWorks: How do you collect a stare? Katherine Ott is the curator of Science and Medicine at the American History Museum. She researches and oversees collections that attest to our changing perceptions of wellness, illness and bodily difference. In part two, Ott explains how notions of disability are reflected in our collections.

#InclusionWorks: Let’s be reasonable For part three of our series,Carol Gover, the Affirmative Employment Manager in the Office of Equal Employment and Minority Affairs, explains how the Smithsonian provides accommodations for staff with disabilities to help them better perform their jobs.

#InclusionWorks: Sharing the Smithsonian with every visitor In part four, Beth Ziebarth and Ashley Grady of the Smithsonian Accessibility Office describe how the Smithsonian is working to make our exhibits, programs and educational opportunities available to everyone.

In November, we remembered our veterans—from all our wars.

Few realize that Native Americans have served our country in every conflict since the Revolutionary War—and in greater numbers per capita than any other group. Read more. 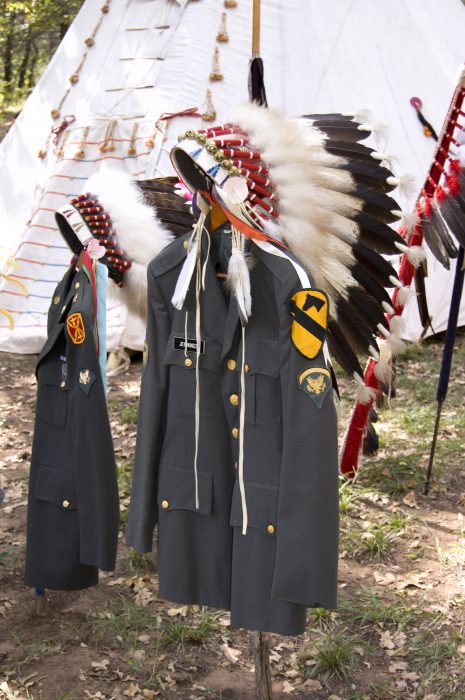 Nanci Edwards shares a family letter that offers a glimpse into what the holiday was like for a young Union soldier spending his first Thanksgiving away from home. Read the letter and learn more about this young soldier. 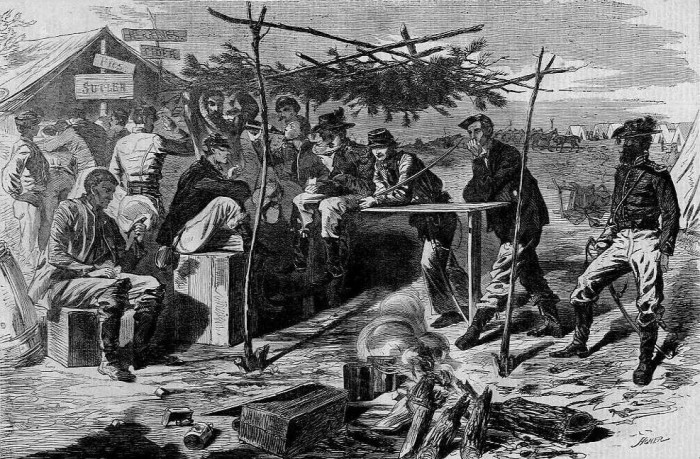 “Thanksgiving in Camp,” a wood engraving drawn by Winslow Homer and published in Harper’s Weekly, November 29, 1862.

In December, we reminded ourselves that we are all eyewitnesses to history every day, and took some time to celebrate the talent of our Smithsonian staff with a hopeful holiday greeting.

Eyewitness to a ‘Day of Infamy:’ Commemorating Pearl Harbor

December 7, 2016, marks the 75th anniversary of the bombing of the Pearl Harbor naval base by the Japanese Imperial Navy. In commemoration of this anniversary, Patri O’Gan shares some letters from the collections of the American History Museum written by a civilian, Beth Slingerland, as she watched the attack from her home in the hills above Pearl Harbor. Read Beth’s letters. 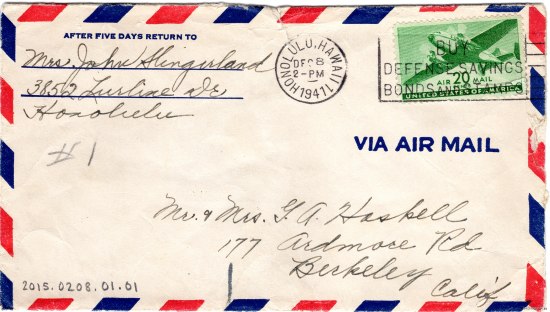 Envelope containing the first letter written by Beth Slingerland describing the attack on the Pearl Harbor naval base. Postmarked December 8, 1941.

Drum roll, please! The winner of the annual Smithsonian winter card contest has been announced. The winning design is a fitting symbol of the Smithsonian’s role in telling the stories of America. Find out more about the artist’s inspiration and view all the finalists.

That about wraps it up for another year. We tried to hit the highlights, but we’re sure we’ve missed some. In fact, here’s more more little story we’d like to include…

A People’s Journey, A Nation’s Story 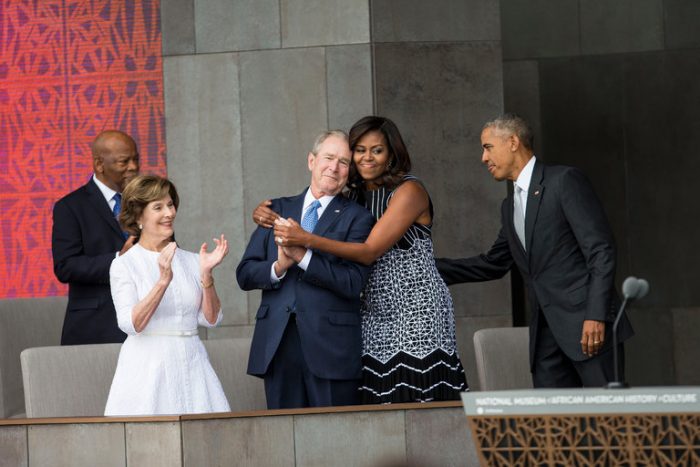 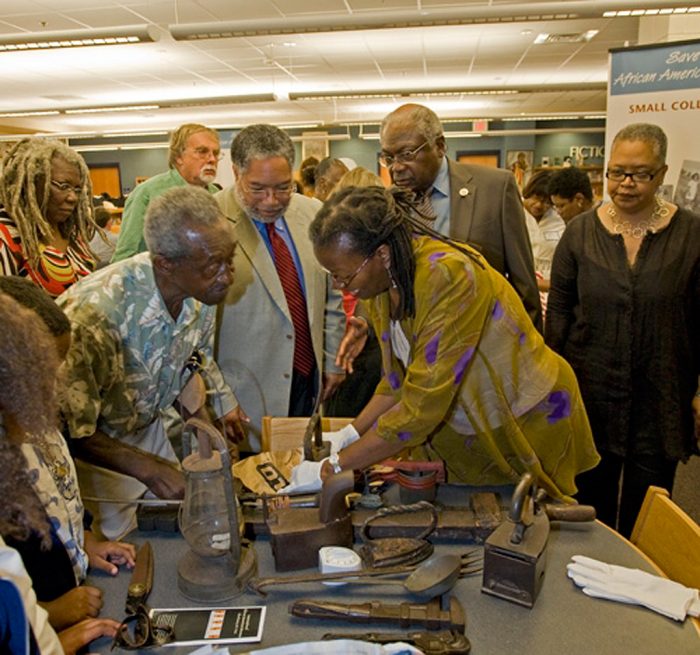 Participants in the “Save Our African American Treasures” program held in May 2009 in Charleston, South Carolina. “Treasures” is a national outreach program presented by the National Museum of African American History and Culture to ensure the preservation of African American history. Looking on (center rear) are NMAAHC Director Lonnie Bunch and Congressman James Clyburn (D-SC), and Deputy Director Kinshasha Holman Conwill stands at right. Visitors are learning how to preserve artifacts. (Photo by Michael Barnes)

The century-long effort to make the museum a reality

The concept behind the museum’s stunning design 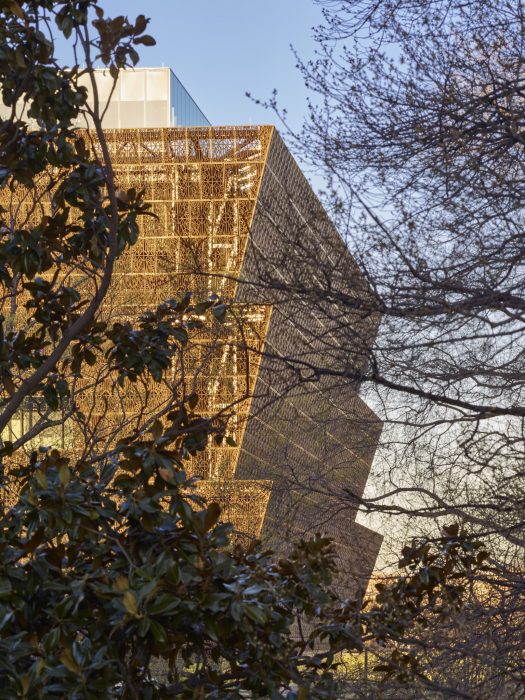 The collections and exhibitions that help tell the African American story 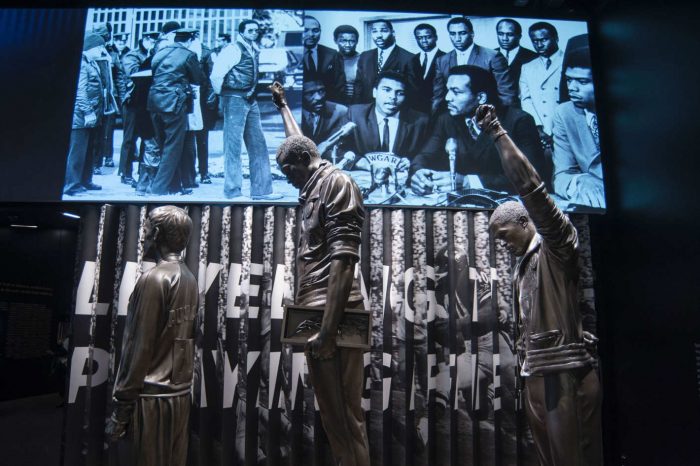 Visitors share their experience of visiting the new museum 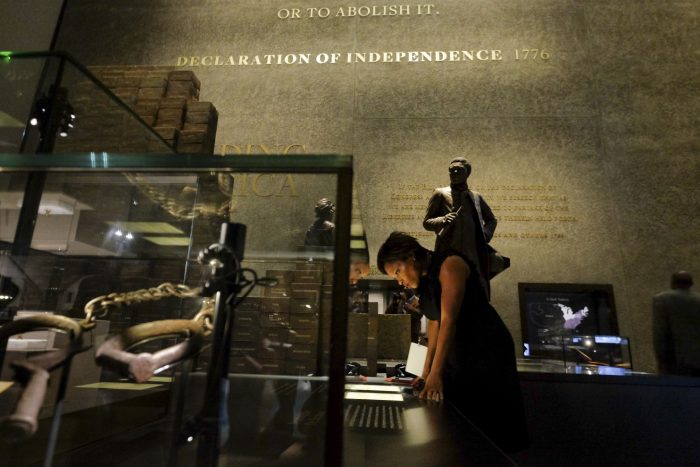 Danielle Robinson, of Chicago, closely reads a rough draft of the Declaration of Independence behind slave shackles during the grand opening of the Smithsonian’s National Museum of African American history and Culture. “It is interesting to see how it has been written to exclude us…Everyone has to know our true history.” (Jahi Chikendiu / The Washington Post)

Does the museum succeed in achieving its goals? 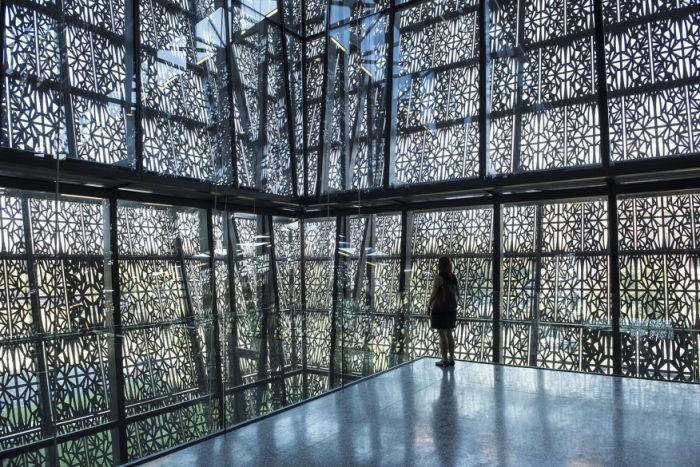 #InclusionWorks: Sharing the Smithsonian with every visitor

A People’s Journey, A Nation’s Story: The Grand Opening