Although there was much of interest in the news this week, we’ll just quote this headline and leave it at that, “Beyond the Golden Toilet: How does art wind up in the White House and what does it tell us about our leaders?”

Beyond the Golden Toilet: How Does Art End Up in the White House, and What Does It Tell Us About Our Leaders?

White House art loans have been in the pipeline for decades. 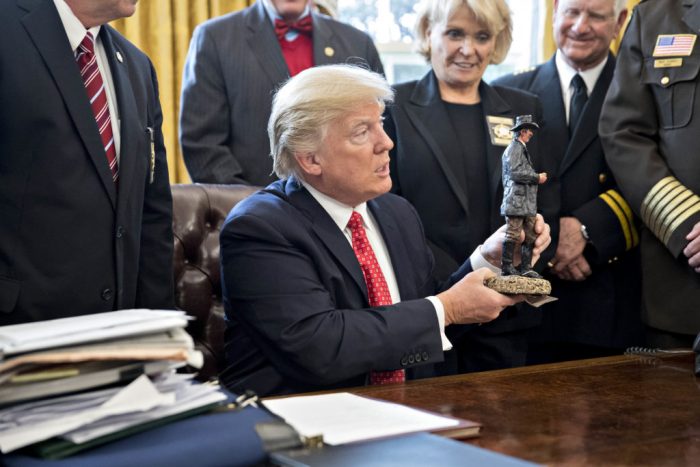 President Donald Trump holds up a statue he received as a gift while meeting with county sheriffs in the Oval Office of the White House on February 7, 2017 in Washington, DC. (Photo by Andrew Harrer – Pool/Getty Images)

It was the loan denial heard around the world. When the White House requested to borrow a painting by Vincent van Gogh from the Solomon R. Guggenheim Museum in September, the museum’s chief curator Nancy Spector kindly declined, but countered with a hum-dinger of a replacement: a golden toilet by Maurizio Cattelan.

After the Washington Post reported the exchange late last month, many applauded her snarkiness, while others—including a Fox Business host who called for the curator’s resignation—viewed it as highly inappropriate.

Party-line divisions aside, the cause célèbre sheds light on a history of lesser-known art loans to 1600 Pennsylvania Avenue. And it illustrates how the Trump Administration appears to be doing things a bit differently than its predecessors. Read more from Menachem Wecker for ArtNet News.

The Cleveland Indians say they’ll stop using the Chief Wahoo logo on their uniforms in 2019. NPR’s Scott Simon talks with Paul Chaat Smith of the National Museum of the American Indian.

A controversial logo will be removed from the uniforms of the Cleveland Indians’ baseball team for the 2019 season. But the caricature of a red-faced Native American called Chief Wahoo will continue to appear on merchandise. In 2018, Native American names and imagery still abound in the United States on products and sports franchises and weaponry. Paul Chaat Smith would like us to take notice. He co-curated a new exhibit at the Smithsonian’s National Museum of the American Indian in Washington, D.C. It showcases hundreds of objects with Native American imagery. And it’s called “Americans.” Paul Chaat Smith joins us in our studios. Thanks so much for being with us. Read the transcript.

Historian Daina Ramey Berry asked curators from the National Museum of African American History and Culture to share the remarkable stories of important African-American figures. Today learn about slave-turned-abolitionist Sojourner Truth and how she controlled her own image to support her activism. 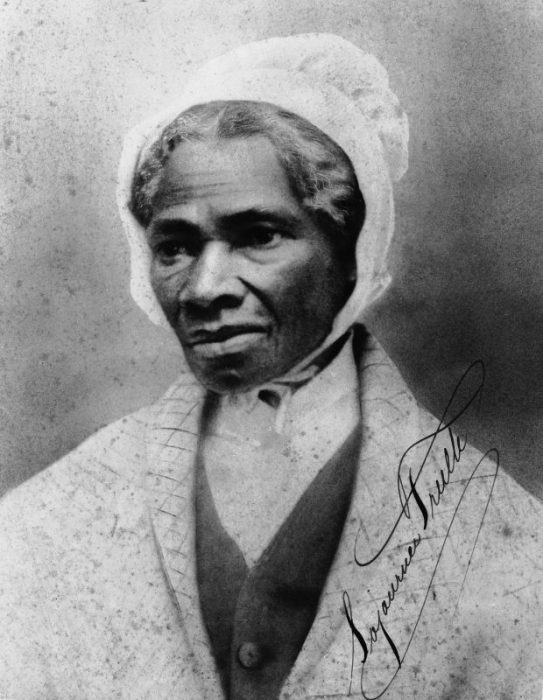 Sojourner Truth was one of the most well-known abolitionists, preachers, and feminist public speakers of the 19th century. She first shared her remarkable life experiences with slavery and freedom in the Narrative of Sojourner Truth, recorded by Olive Gilbert, published in 1850 and reprinted countless times afterward. Written in third person, the narrative is frequently interrupted by Gilbert’s own opinions which often silenced Truth’s voice. But Sojourner Truth was not someone who would be silenced; she told her story to large and small audiences and made sure her message and images would be around for years to come. In addition to leaving a Narrative behind, she also produced a series of photographs, two of which are in the collection of the National Museum of African American History and Culture and one is on display in the exhibition, “Slavery and Freedom” at the National Museum of African American History and Culture. Read more from Daina Ramey Berry.

The Epic Journeys of Migratory Birds 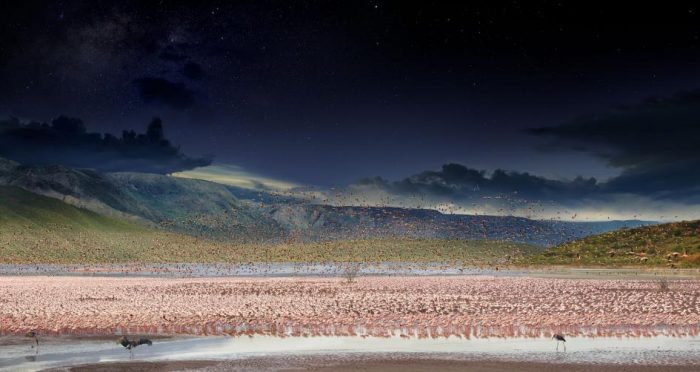 LESSER FLAMINGOES Lake Bogoria, Kenya The lesser flamingos of Africa’s Great Rift Valley thrive in the extreme environment of high-altitude soda lakes, feeding on algal blooms that are toxic to many other creatures. The birds are not migratory but nomadic, traveling from one lake to another, wherever food is plentiful. Wilkes shot 1,742 photos over 36 hours from a 30-foot scaffolding wrapped in camouflage, capturing the endless movements of the flamingos and the marabou storks stalking them. He chose about 30 for this image.

As the sun was setting over the Firth of Thames in New Zealand, dozens of bar-tailed godwits shuffled about lazily on the edge of the bay, the wind fluffing their feathers.

The tide was coming in, submerging the mudflats where the birds had been feeding, sticking their long bills into the soft earth to dig up worms and crabs. As the water advanced, they stopped foraging and waded ashore, inelegantly carrying their plump, butterball bodies on stilt-like legs. A bit homely and ungainly, with drab plumage, godwits appear quite ordinary. As the sky turned orange, they settled down to roost. Resting for hours on end, they can seem rather sedentary. Read more from Yudhijit Bhattacharjee and view photos from Stephen Wilkes for National Geographic.

The Smithsonian American Art Museum (SAAM) Arcade is a yearly event that celebrates game culture and the work of indie game developers, and submissions for the museum’s fourth annual SAAM arcade are now open.

This is a good opportunity for devs to get their game in front of people and receive playtesting feedback, as well as the potential to have their work showcased at the Smithsonian. Read more from Emma Kidwell for Gamasutra.

A new exhibit open in Washington, D.C. looks into the lives of four women who served alongside the U.S. military during World War I.

The women involved were two U.S. Army nurses, a U.S. Navy Yeoman and a YMCA worker. Curators of the exhibit at the Smithsonian’s National Postal Museum hope to display what World War I looked like “in her words.” Read more from Jessie Karanga for Circa.com.

After decades of wondering what starfish use their eyes for, scientists see some light. 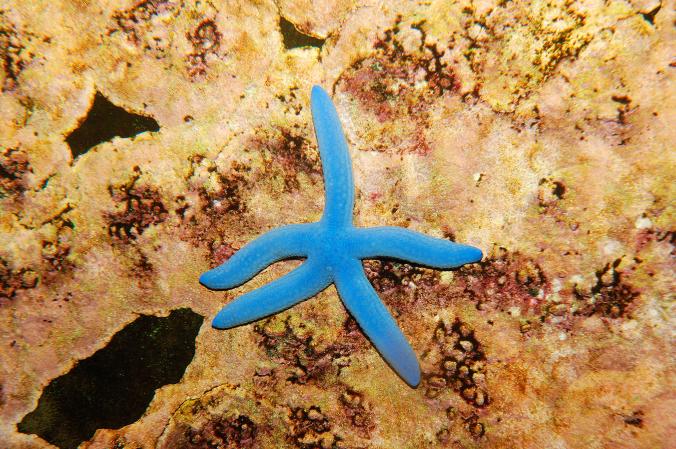 Scientists say that starfish, like this blue starfish, use their eyes to stay close to home. PHOTOGRAPH BY ARCO IMAGES GMBH, ALAMY

Starfish have eyes—one on the end of each of their arms—but what they do with them was anyone’s guess.

Starfish have historically been thought of as simple animals. Since their eyes are also relatively simple and because they lack a brain, it was difficult to figure out how or even if they could see. Read more from Jane J. Lee for National Geographic. 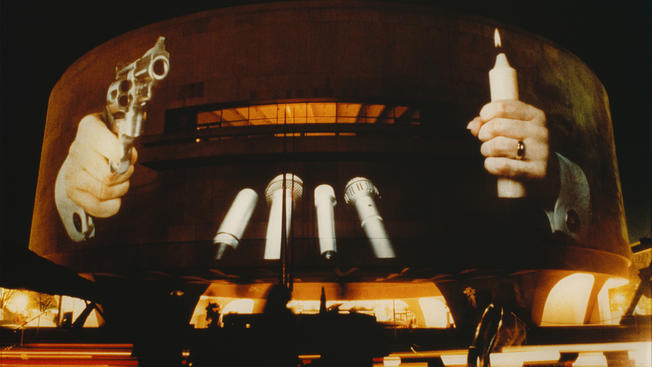 Pass by the Hirshhorn on certain February nights, and you may be staring down the barrel of a gun — not a real weapon, but a larger-than-life projection on the circular walls of the museum.

Don’t be startled: it’s part of museum’s upcoming exhibit “Brand New: Art and Commodity in the 1980s,” a look back at art from the 1980s that confronts issues that may feel familiar today, including gender equality, commericalism, bad diets and gun control. Read more from Sophia Barnes for NBC4. 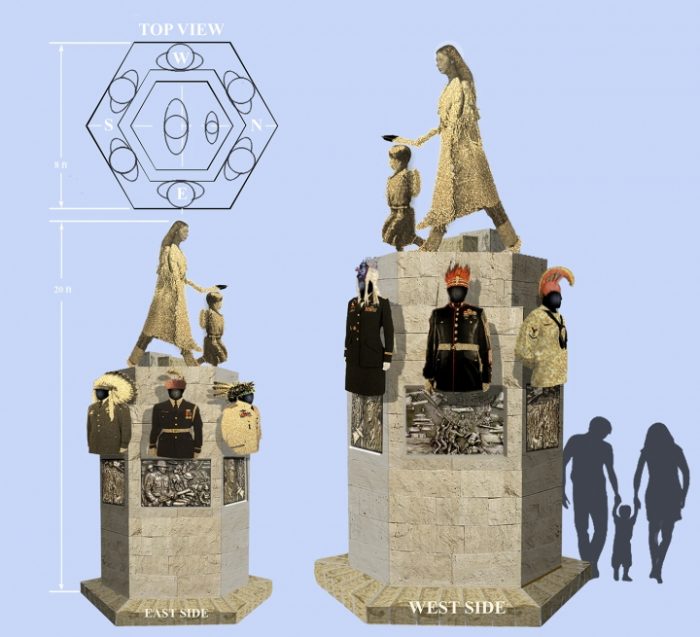 “We Fight For Our Country!” design proposal by Daniel SaSuWeh Jones and Enoch Kelly Haney (all images courtesy Smithsonian’s National Museum of the American Indian)

A decades-old plan to honor Native American veterans with a prominent memorial on the National Mall is on its way to becoming a reality. Smithsonian’s National Museum of the American Indian (NMAI) today shared five potential concepts for the permanent monument that will eventually stand on its grounds, designed by artists who responded to an open-to-all, international design competition the museum launched last fall.

The visions of the finalists — three of whom are Native American (and two on the same team) — vary widely in style. Among them is a hexagonal, rough marble monument by Daniel SaSuWeh Jones of the Ponca Nation and Enoch Kelley Haney of the Seminole Nation, which depicts six warriors who surround allegories of Nature and the Future. A more modern design by LA-based landscape architect James Dinh centers on five triangular, translucent totems to be etched with terms like “sacrifice” and “valor,” which will illuminate at night. The Cheyenne-Arapaho artist Harvey Pratt also proposed a minimalist but striking memorial in the form of a large loop that represents a sacred circle, rooted in symbolic elements of water and fire. Read more from Claire Voon for Hyperallergic.

The Smithsonian Institution has announced the conclusion of a three-year, $1.5 billion capital campaign.

Through the Smithsonian Campaign, which encompassed all nineteen museums in the Smithsonian system, the National Zoo, and nine research centers and educational units, the Smithsonian raised a record $1.88 billion in contributions from five hundred and thirty-five foundations, corporations, and individual donors from all fifty states and more than a hundred countries. According to the Smithsonian, it is the largest amount ever raised through a capital campaign by a cultural organization. Read more.

Thinking about natives in an era of nativism 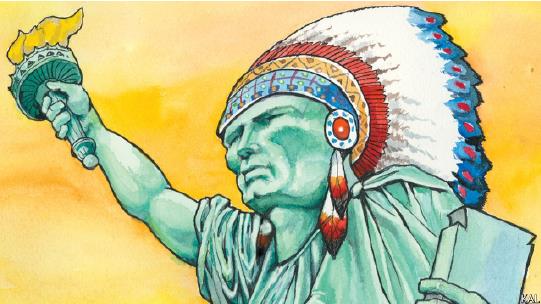 In early 1924 the blue-bloods of Virginia found themselves with a problem. To criminalise interracial marriage, the state had drafted a law that classified anyone possessing even “one drop” of non-white blood as “coloured.” Awkwardly, that would include many of the so-called First Families of Virginia, because they traced their descent to native woman, Pocahontas, who had been abducted and married by a member of the Jamestown colony three centuries before. This ancestry had been considered far from shameful. It was a mark of American aristocracy, the real-life Pocahontas having been reinvented (she probably did not save the life of a colonist called John Smith) as an “American Princess.” To fix matters, a clause known as the “Pocahontas exception” was added to the racist law, to exempt anyone with no more than one-sixteenth Indian blood. Read more from the Economist: Looking at Indians white Americans see themselves – The Economist 2-9-18