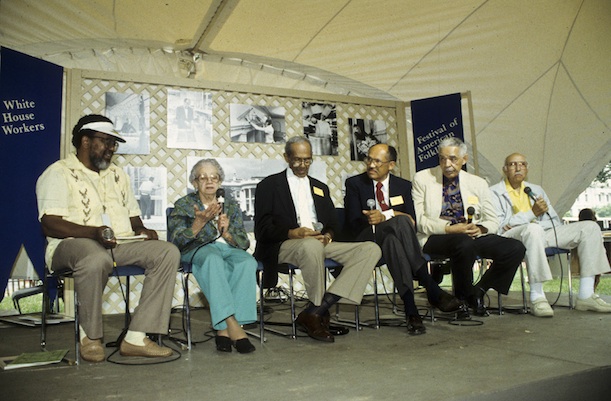 Worth Long, left, moderates a discussion of former White House Workers during the 1992 Festival of American Folklife. Eugene Allen is fourth from the left. Allen,  who served as White House butler for 34 years, was the inspiration for Lee Daniels’ 2013 film, “The Butler.” (Photo courtesy Smithsonian Center for Folklife and Cultural Heritage)

January 11, 1994 “Workers at the White House” opens at the Gerald R. Ford Library in Grand Rapids, Mich. The traveling exhibition was produced by the  Traveling Exhibition Service and the Center for Folklife Programs and Cultural Studies in cooperation with the White House Historical Association and the National Archives in celebration of the 200th anniversary of the White House. It is based on a program presented during the 1992 Festival of American Folklife and gives an intimate, behind-the scenes portrait of “the people’s house.”

A few of my favorite things: Cristina Diaz-Carrera